After the dress came in for criticism in some quarters, Rajya Sabha Chairman M Venkaiah Naidu on November 19 ordered a review. 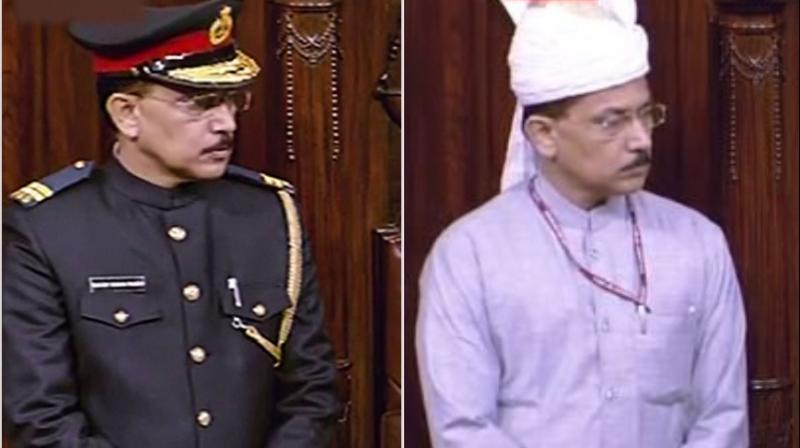 A week after their military-style uniforms created a controversy, Rajya Sabha marshals on Monday were again back in traditional Indian attire but without the 'pagri'. (Photo: File)

New Delhi: A week after their military-style uniforms created a controversy, Rajya Sabha marshals on Monday were again back in traditional Indian attire but without the 'pagri'.

The two marshals, who flank the Chair, came to the House wearing dark coloured Indian bandhgalas, a dress that a Congress member remarked was "very smart." The marshals were seen in military-style outfits with caps in place of traditional Indian attire comprising turbans when the Rajya Sabha's landmark 250th session opened last Monday.

While the dress code of the marshals had changed, the uniform of nearly a dozen ushers who stand at the back of each row to fetch papers and assist MPs had remained unchanged. They had continued to don Indian attire with a pointed pagri or headgear.

The uniform of ushers remained unchanged on Monday. Customarily, the presiding officer of the House is flanked by two marshals who march ahead of the chairman to announce commencement of proceedings and also assist the chair in organising the desk and bringing up order papers.

On November 18, the first day of the 250th session of the Upper House of Parliament, two marshals in military-style uniforms and caps marched in, much to the surprise of members.

Though the new uniform was olive green, it was different from the ones worn by military personnel. It, however, sported an aiguillette, an ornamental braided cord with decorative metal tips.

The new uniform was criticised by some members with Jairam Ramesh of the Congress remarking that it looked if it was ushering in of "marshal law". The marshals earlier wore Indian bandhgalas along with turbans. After the dress came in for criticism in some quarters, Rajya Sabha Chairman M Venkaiah Naidu on November 19 ordered a review.

Two days later, the marshals came to the House without the military-style caps. Following the controversy, sources in the Rajya Sabha Secretariat had claimed that marshals themselves were not happy with their earlier outfits, especially the headgear.