Many people submitted their applications to Adityanath and urged him to take requisite steps to resolve their issues. 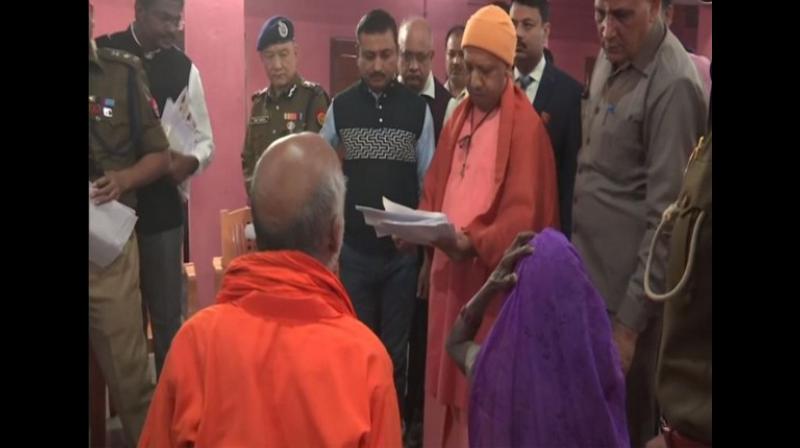 The Chief Minister has assured justice to people with grievances. (Photo: ANI)

Gorakhpur: Uttar Pradesh Chief Minister Yogi Adityanath held a 'Janta Durbar' at the Gorakhnath Temple here on Monday to address the grievances of the people.

Many people submitted their applications to Adityanath and urged him to take requisite steps to resolve their issues.

Some people spoke to ANI about their applications and said that the Chief Minister has assured them justice.

"I am an army man's wife. I have been cheated of 28 lakhs. We gave two to three applications previously but no investigation is happening. A policeman is involved and has threatened to kill us if we do not withdraw our application. I gave a fresh application to the Chief Minister and he has assured me of sending the report soon and resolving the problem," Hema Patel said.

Another applicant Vikas Kumar Giri, narrated his grievance, saying, "My mother has been going to Lucknow PGI hospital for the last seven to eight months. There, she used to get an assurance that doctors would perform surgery on her. But she used to return disheartened every time. We have apprised this to the Chief Minister who has directed the health authorities in Lucknow to resolve our problem."

Adityanath used to hold such public meetings even before becoming the Uttar Pradesh Chief Minister in 2017.