Addressing the gathering in Noida, PM Modi said the just-inaugurated metro line was not only for present, but also for future generations. 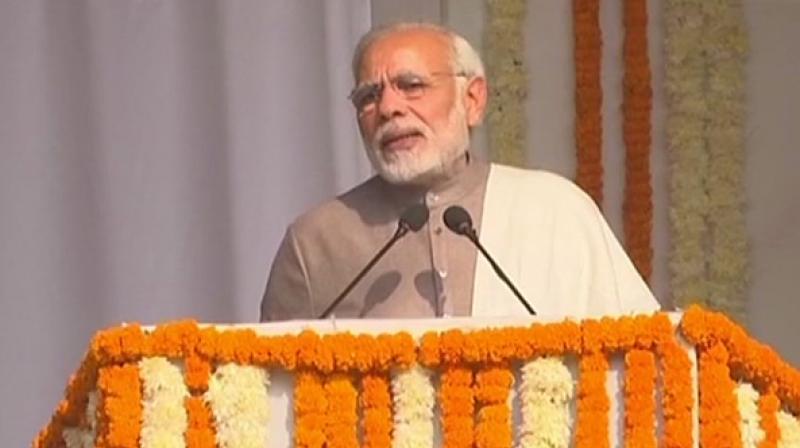 Prime Minister Modi, along with Adityanath, also travelled on a patch of the new route - from Noida to the Okhla Bird Sanctuary station. ( Photo: ANI | Twitter)

Noida: Soon after inaugurating a stretch of the new Magenta line of the Delhi Metro, Prime Minister Narendra Modi on Monday said the development of the railway and road infrastructure was happening at a historic pace under the government at the Centre.

Addressing the gathering in Noida, Prime Minister Modi said the just-inaugurated metro line was not only for the present, but also for future generations.

"We live in an era in which connectivity is all important. This metro, whose line was just inaugurated, is not only for the present but also for future generations," he said.

Dreaming to live in an India in which the petrol imports reduce, Prime Minister Modi said that in order to achieve this, state of the art mass transit systems were the need of the hour.

"In 2022, when we mark 75 years of freedom, I dream that we live in an India in which our petrol imports reduce. In order to achieve this, state of the art mass transit systems are the need of the hour. 24th December 2002...Atal Bihari Vajpayee Ji took the ride on the metro. This was a historic moment. Since then, the metro network in NCR has expanded considerably," he added.

He further said that governance cannot happen when the dominant thought process begins at 'Mera Kya' and ends at 'Mujhe Kya', adding it was important for governments to do away with outdated laws that hamper the growth of the nation.

"We have changed these mindsets. For us, decisions are about national interest and not political gains. Earlier, the governments took pride in making new laws. We said we wanted to be the Government that removes laws that are obsolete. Good governance can't happen when outdated laws hamper decision making," he added.

Praising Uttar Pradesh Yogi Adityanath for his good governance in taking the state to new heights, Prime Minister Modi said, "I am very happy. Due to his dress, few people find it fashionable to believe he is not 'modern enough' but it is Yogi Adityanath Ji who has done what the other chief ministers of Uttar Pradesh could not - he has come to Noida."

"When I became the chief minister, people told me of a few places where no chief minister's went because they were inauspicious. I was clear...I would go to all those places in my first year itself. Driven by blind faith and superstition, leaders never went to places for decades. How unfortunate is that! Unfortunately, there were superstitions associated with Noida and in his own style, Yogi Adityanath has risen above these superstitions and has come to Noida," he added.

Uttar Pradesh Chief Minister Yogi Adityanath on Monday said the step to inaugurate a stretch of the new Magenta line of the Delhi Metro would prove to be a milestone towards development of Noida and Greater Noida.

Speaking at the inaugural ceremony of the metro line in Noida, the chief minister said, "This step to inaugurate Metro's magenta line will prove to be a milestone towards realising the dreams of development for the Noida and the Greater Noida region."

He added the Uttar Pradesh Government would soon bring new metro lines in Kanpur and Agra as well.

"Today is Christmas and it is also the birth anniversary of former prime minister Atal Bihari Vajpayee. I thank Prime Minister Narendra Modi for giving Uttar Pradesh the offering of this new metro line on this occasion," Adityanath further said.

Prime Minister Modi, along with Adityanath, also travelled on a patch of the new route - from Noida to the Okhla Bird Sanctuary station.

The 12.64-km stretch runs between Kalkaji and Noida's Botanical Garden and accounts for a travel time of 19 minutes, thus facilitating easy access for commuters from South Delhi to Noida, and vice versa.

The coaches will reportedly have an LED display, power charging capacity and colourful seats, while the stations will portray themes of nature, yoga, and cultural landmarks. Further, driverless trains are to be introduced along with the Communication Based Train Control (CBTC) signalling technology, which would facilitate the movement of trains within a frequency of 90 to 100 seconds.

The Magenta Line also marks the usage of the first platform screen doors (PSDs), which are glass-made screens installed near the edge of platforms that open only when a train arrives and shut after it departs.