An innovative intervention, water ATMs (similar to the bank ATMs), in their village has solved their drinking water needs. 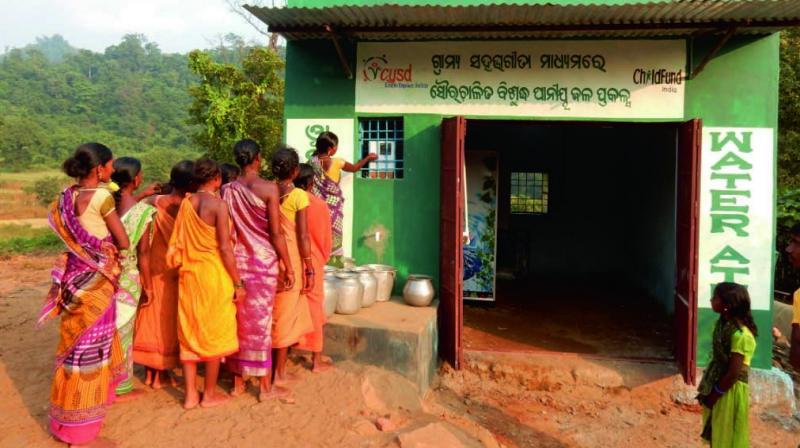 A woman collects water from an ATM in Chilipadar village.

Malkangiri: Residents of Chilipadar, a tribal village located in the hilly Khariput under Kudumul Guma block in Malkangiri district, no longer run around to find drinking water to quench their thirst. Nor are they worried about getting affected with water-borne diseases caused due to consumption of contaminated water from unsafe sources.

An innovative intervention, water ATMs (similar to the bank ATMs), in their village has solved their drinking water    needs. They are an automated water purification system, which provides access to safe water to people 24x7. How  do these water ATMs work;  insert a 10 paisa coin in the machine and the tap outside it gurgles out 20 litres of water.

Before water ATMS were installed, the villagers used to collect water from distant nullahs and streams, locally called ‘Tupi Jholas’, after walking for hours together. Frequently, they spent nearly the dug entire day to collect one or two buckets of water.

“Initially, the community exhibited their commitment by digging a well out of their own community contribution. And finally, the dug well was converted into a community sanitary well. A water treatment plant was set up in their village where the water ATMs were installed. A household of the three members can now collect at least 20 litres of drinking water per day at a cost of 10 paisa per litre,” said CYSD programme manager Prafulla Maharana.

The CYSD, a development organisation, in collaboration with Child Fund, conducted a detailed survey to find a permanent solution to their problem.

During the survey, the researchers were surprised and shocked to see that women in summer dug four to five feet deep pits in the bed of dried-up streams and nullahs to collect a few buckets of drinking water.

After consultation with the villagers, it was decided that solar-power-driven water-filters shall be installed near all the ‘Tupi Jholas’. From ‘Tupi Jholas’, the purified water was supplied to water tanks installed in the village where the water ATMs are set up.

With contributory labour mobilisation, the villagers, who belong to the primitive Didai tribal community, built a water tank. The CYSD and the Child Fund provided necessary technological and other infrastructure support.

“This has come as a major learning as well as challenge for the project team if the villagers stick to their commitment and successfully complete the project. This is a clear case of study of a successful community mobilisation in creating and maintaining a precious life-saving infrastructure,” said social activist and former Odisha Information Commissioner Jagadanand.

Earlier, the villagers used to travel miles to collect water from nullahs and streams at distant places. These water sources were contaminated as both animals and human beings use them. The villagers would suffer from jaundice, diarrhoea and other water-borne diseases. Since there are no healthcare facilities nearby, they were left to their fate,” said Sukhiram Khila, a resident of Chilipadar.

The good quality water from the ATMs has improved the health of the villagers who can now  focus more on their occupation and income-generating activities.