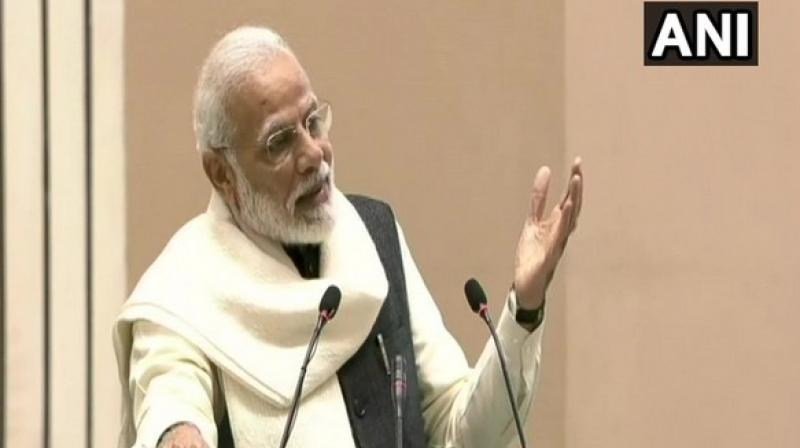 Earlier, the Union Cabinet gave its approval for the implementation of the Atal Bhujal Yojana, a central sector scheme with a total outlay of Rs 6,000 crore to be implemented over a period of five years (2020-2021 to 2024-2025).

The scheme aims to improve groundwater management through community participation in identified priority areas in seven states -- Gujarat, Haryana, Karnataka, Madhya Pradesh, Maharashtra, Rajasthan and Uttar Pradesh. Implementation of the scheme is expected to benefit nearly 8,350 gram panchayats in 78 districts in these states.

The initiative will promote panchayat led groundwater management and behavioural change with a primary focus on demand-side management.
Earlier in the day, Modi, President Ram Nath Kovind and other BJP leaders paid floral tributes to Vajpayee at the 'Sadaiv Atal' memorial here.

Born on December 25, 1924, in Madhya Pradesh's Gwalior, Vajpayee was an active member of the Rashtriya Swayamsevak Sangh (RSS). He was among the founding members of the Bharatiya Jana Sangh.

Known for his eloquent oratorical skills, he was a member of both Lok Sabha and Rajya Sabha, representing Lucknow from the Lower House from 1991 to 2009.
Vajpayee was one of the several leaders who were jailed during the Emergency imposed by then prime minister Indira Gandhi in 1975.

During his tenure, India had carried out the Pokhran-II nuclear tests in Rajasthan in 1998 and the Kargil War between India and Pakistan had broken out in 1999.
Apart from politics, Vajpayee was a prominent writer and has penned a number of poems.

After resigning as the prime minister in 2004, the BJP stalwart retired from active politics owing to his feeble health.

In 2015, Vajpayee was bestowed with Bharat Ratna, the country's highest civil honour.

The veteran BJP leader passed away on August 16, 2018, at the All India Institute of Medical Science (AIIMS) in Delhi following a prolonged illness.
December 25 is celebrated as 'Good Governance Day' in honour of Vajpayee.
Later in the day, Modi will unveil a statue of Vajpayee at Lok Bhawan in Lucknow.