Lindenthal was quoted by the media as saying that the CAA was “a clear form of discrimination” going against the secular Indian Constitution. 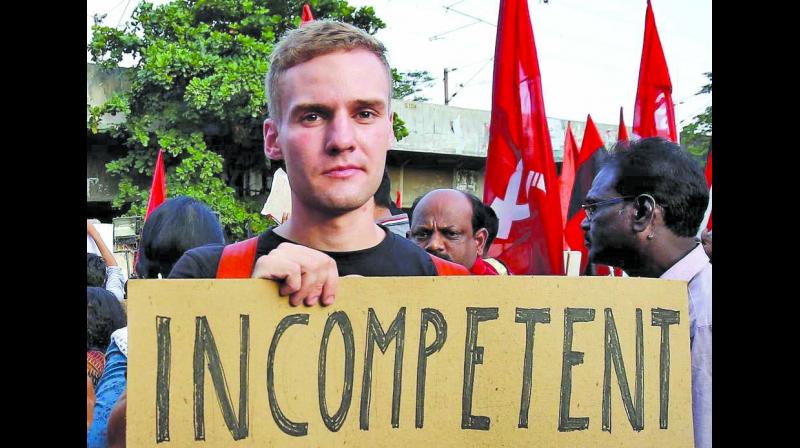 Chennai: A German student at the IIT-Madras is on his way back home after the immigration department here told him to leave following his participation in multiple protests here against the Citizenship Amendment Act (CAA) over the last one week.

Jakob Lindenthal, 24, was summoned by the Foreigners Regional Registration Office (FRRO) on Monday to be told to leave the country as he had violated his student visa conditions by participating in political rallies in the host country.

Sources at IIT said Mr Lindenthal has completed his second semester with the Physics department at IIT-M and still has one more semester to be completed under his Exchange Programme that brought him here from home at Dresden in Germany.

He was spotted at several anti-CAA protests in Chennai over the last one week and the media showed him holding posters with stinging slogans critical of the BJP government over the CAA, some of them even likening the situation to what prevailed under Adolf Hitler’s Nazi regime. Another poster screamed, ‘Uniformed criminals = criminals’, obviously referring to the police action against the JNU students.

Also, Mr Lindenthal was quoted by the media as saying that the CAA was “a clear form of discrimination” going aga-inst the secular Indian Constitution. “I am from Germany and I am aware of what happens when this form of discrimination is taken too far”, a popular news site quoted him saying. And on his subsequent exit order, his retort was that nobody “is ever evicted from Germa-ny for participating in a legal demonstration”.

Sources said Mr Lindenthal was told by his student coordinator that he was wanted at the FRRO office and when he went there, he was asked by the officials what his views on CAA were. To this, Mr Lindenthal reportedly revealed his strong opposition. He was told to wait outside and after sometime, was informed of the decision to send him back to Germany. Mr Lindenthal offered to give a letter apologising but that was rejected, sources said, adding that the German consulate in the city offered legal assistance but he chose to return home.