The Republic Day, falling in the 75th year of Independence is being celebrated as 'Azadi Ka Amrit Mahotsav' across the country 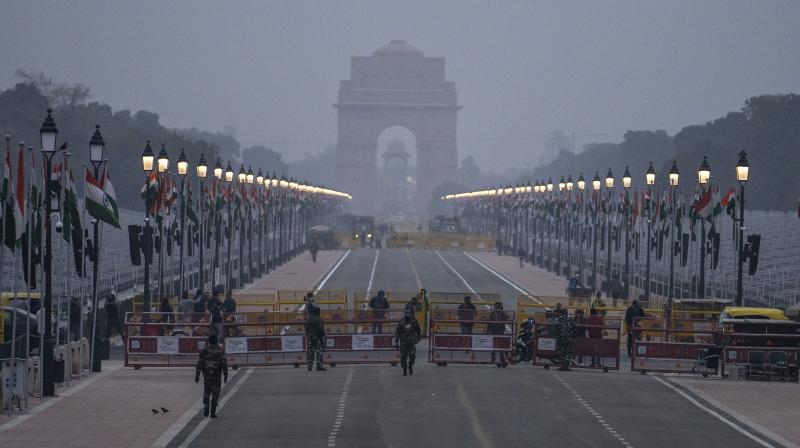 New Delhi: The grand parade on Rajpath in the national capital on the country's 73rd Republic Day on Wednesday is set to showcase India's military might and cultural diversity as the country marks the day its constitution came into force.

The Republic Day, falling in the 75th year of Independence is being celebrated as 'Azadi Ka Amrit Mahotsav' across the country.

The R-Day parade on Rajpath will commence at 10: 30 am, half-and-hour later than its earlier timing at 10 am "to provide better visibility to the parade and flypast," according to the Defence Ministry.

Delhi Police has increased security around the area and has closed roads and metro gates near Rajpath.

Cultural performances by over 480 dancers from across the country will be showcased at the parade. A total of 21 tableaux and a grand flypast by the Indian Air Force (IAF) aircraft will also be showcased.

Large LED screens have been placed on each side of Rajpath for spectators at the location. With the parade being held during the coronavirus pandemic yet again, the guest list has curtailed to ensure necessary COVID protocols.

The Republic Day Parade celebrations will commence with the homage ceremony at National War Memorial, where Prime Minister Narendra Modi will lead the nation in paying homage to the martyrs.

As per tradition, the national flag will be unfurled followed by the National Anthem with a booming 21-gun salute. The parade will commence with President Ram Nath Kovind taking the salute. The parade will be commanded by Parade Commander, Lieutenant General Vijay Kumar Mishra, Ati Vishisth Seva Medal, a second-generation Army officer. Major General Alok Kacker, Chief of Staff, Delhi Area will be the Parade Second-in-Command.

The President will posthumously award Ashok Chakra to ASI Babu Ram of Jammu and Kashmir Police. His wife Rita Rani will receive the biggest gallantry medal in peace time.

Many unique initiatives have been included to mark the celebration of the 75th year of Independence as part of 'Azadi ka Amrit Mahotsav'.
A total of 21 tableaux, 12 of various states and Union Territories, nine of ministries will be showcased this year.

Special arrangements have been made keeping in view the current COVID-19 situation. The number of seats for spectators has been significantly reduced and people are being encouraged to register online to witness the live celebrations.

According to the Ministry of Defence, for the first time, an Indian Air Force (IAF) will show grand flypast by 75 aircraft or helicopters.

A drone show by 1,000 indigenously developed drones has been planned for the 'Beating the Retreat' ceremony, along with projection mapping will be shown for the first time at the Republic Day parade. For the first time, 480 dancers who will perform during the cultural programme at the parade have been selected through a nationwide Vande Bharatam dance competition.

The main parade for the first time will also see the launch of 'Shaheedon Ko Shat Shat Naman' programme by National Cadet and a display of ten scrolls each of 75 metres prepared during the 'Kala Kumbh' event and installation of 10 large LED screens for a better viewing experience of spectators.

Republic Day celebrations commenced from January 23 with PM Modi on the occasion of Netaji's Subhas Chandra Bose 125th birth anniversary, unveiled the hologram statue of the freedom fighter at India Gate in the national capital. The week long celebrations will culminate on January, 30 which is observed as Martyrs' Day.