The Partition Museum is located at Town Hall, Amritsar, a short walk from the Golden Temple. 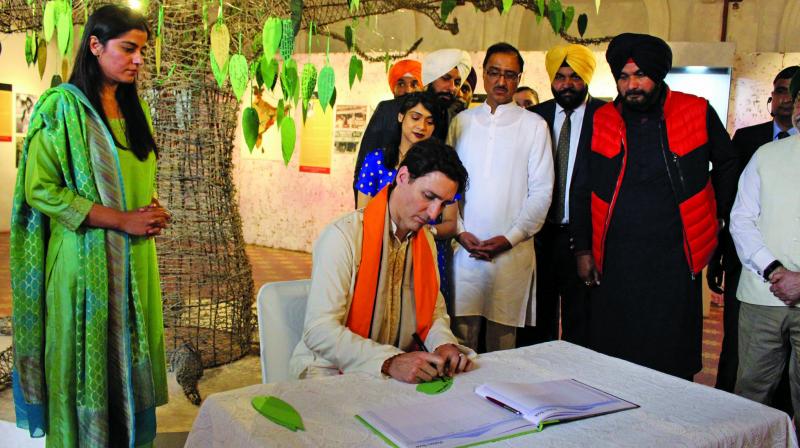 Mr Trudeau spent about 25 minutes at the Partition Museum. He spent time in the Gallery of Migration, hearing the stories and looking at various objects carried by people as they fled their homes and moved across the newly-drawn borders. He also paused at the well installation in the Gallery of Divisions, dedicated to the women who were lost at the time of Partition. He spent the maximum time in the Gallery of Hope, which focuses on love and reconciliation. He left a note on the Tree of Hope, writing that the museum is “a poignant reminder that dividing people is never the answer; we must learn to live together and love our differences”.

Partition Museum CEO and curator Mallika Ahluwalia said: “We are very grateful to Prime Minister Trudeau for visiting the Partition Museum. As Canada has a vibrant Punjabi community, the museum is very keen to record and include the stories of Punjabis settled there.”

Prime Minister Trudeau also shared his thoughts on the Partition Museum, saying “to think of the lives torn apart, the violence and loss... We need to remember that it’s always easy to divide people. It’s much more difficult but it’s the only path to bring people together in love and understanding. We have to be ever vigilant that is what we are putting into the world and that is the way we are building our future”.

The Prime Minister, who was on a eight-day visit to India, had earlier paid obeisance at the Golden Temple. The Partition Museum is the world’s first museum dedicated to the Partition of the Indian subcontinent in 1947. The museum is dedicated to all those millions impacted in the largest migration in human history and is a space of reconciliation. The museum uses multi-media exhibits, including oral histories, archival footage, historical newspapers, official files, as well as personal documents and objects carried by individuals and families who lived through the Partition to tell the story. It also aims to become a comprehensive archive on the Partition. The museum opened with a curtainraiser exhibition in October 2016, and opened all its galleries to the public on August 17, 2017.

The Partition Museum is located at Town Hall, Amritsar, a short walk from the Golden Temple.