Countries which are participating in the exercise include Australia, Malaysia, Maldives, Mauritius, Myanmar, New Zealand, Oman and others. 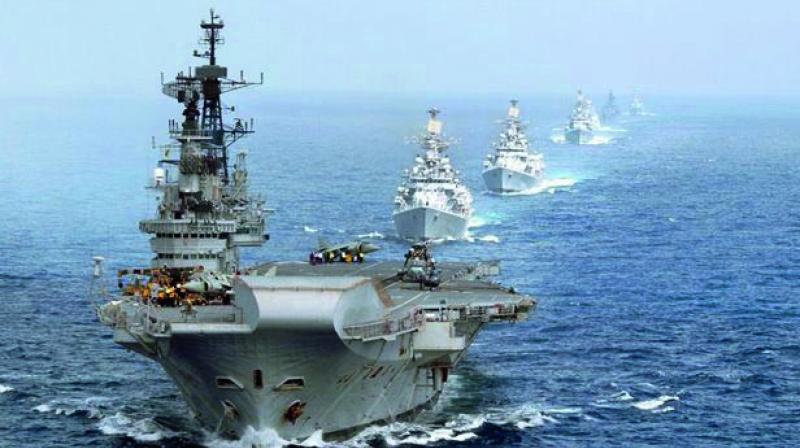 The aim of the initiative was to have an effective forum to discuss common concerns in the Indian Ocean Region and forge deeper cooperation among friendly navies. (Photo: File | Representational)

New Delhi:  India will host navies from 16 countries for an eight-day mega naval exercise from March 6 with an aim to expand regional cooperation and combat unlawful activities in critical sea lanes.

The biennial exercise 'Milan' is being organised at the Andaman and Nicobar Islands in the backdrop of China's growing military posturing in the Indo-Pacific region. Officials said the issue is likely to figure during deliberations among navy chiefs of the participating countries at the event.

He said the countries which are participating in the exercise include Australia, Malaysia, Maldives, Mauritius, Myanmar, New Zealand and Oman, among others.

Besides fostering cooperation through naval exercises and professional interactions, Captain Sharma said 'Milan' will also provide an opportunity to the participating navies to nurture stronger ties in dealing with various security challenges.

India, the US and several other nations have been pressing for freedom of navigation in the South China Sea.

Officials said China's military manoeuvres in the South China Sea may figure during discussions among navy chiefs of the participating countries at the event.

In November, India, the US, Australia and Japan gave shape to a long-pending quadrilateral coalition to develop a new strategy to keep the critical sea routes in the Indo-Pacific free of Chinese influence.

"From an event of sub-regional context, Milan has now grown into a prestigious international event and encompasses participation by maritime forces from not just the Bay of Bengal and South East Asia but the larger Indian Ocean Region (lOR)," Captain Sharma said.

'Milan' was first held in 1995 with the participation of just five navies. The aim of the initiative was to have an effective forum to discuss common concerns in the Indian Ocean Region and forge deeper cooperation among friendly navies.

The exercise is being hosted by the Indian Navy under the aegis of the Andaman and Nicobar Command.