India   All India  26 Feb 2019  Zero tolerance to terror, will go to any extent to secure the country: Amit Shah
India, All India

Zero tolerance to terror, will go to any extent to secure the country: Amit Shah

'We are proud that a surgical strike was conducted at a place which was used for spreading terrorism in India since long' said Amit Shah. 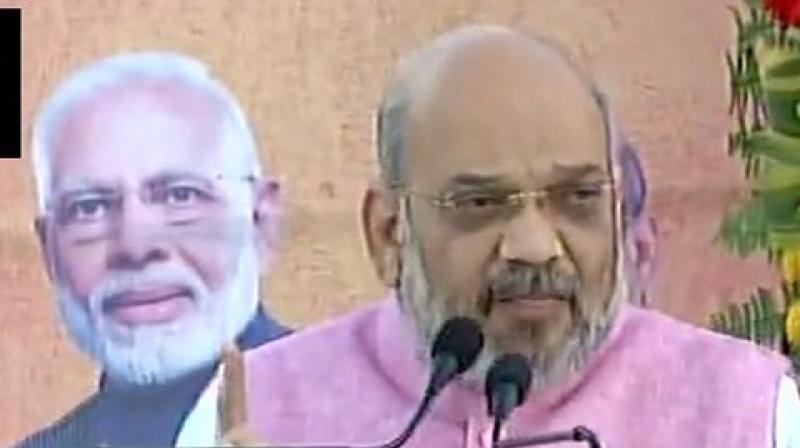 Ghazipur: Asserting that India has zero tolerance for terrorists and terrorism, Bharatiya Janata Party (BJP) President Amit Shah on Tuesday said that the surgical strike and air strikes have given a clear message that for country's security India can go to any extent.

Addressing a public gathering at the launch of BJP's Kamal Jyoti event here, Shah said, " Be it terrorist attacks, terrorist organisation or terrorists themselves, we have zero tolerance for all. We are proud that a surgical strike was conducted at a place which was  used for spreading terrorism in India since long."

Hailing Prime Minister Modi's leadership and governance, he further added, "In 2014, PM Modi had promised a safe and secure India. Surgical strikes after Uri and now air strikes in self-defence, both have given the message to the world that for the security of the country, India's soldiers and government can go to any extent."

Earlier in the day, Shah had hailed the IAF strikes. "I congratulate and salute the bravery and valour of our armed forces. Today’s action further demonstrates that India is safe and secure under the strong and decisive leadership of PM Narendra Modi. Today's strong action shows the will and resolve of a New India. Our New India will not spare any acts of terror and their perpetrators and patrons," he tweeted.

On wee hours of Tuesday, Indian Air Force (IAF) had attacked terror camps in Balakot area in Pakistan’s Khyber Pakhtunkhwa province, targeting key operatives of dreaded terror outfit—Jaish-e-Mohammad (JeM), which carried out a debilitating attack on CRPF convoy in Pulwama on February 14 in which more than 40 jawans were killed.