She saw activities where kids were reading books, building blocks and busy colouring. 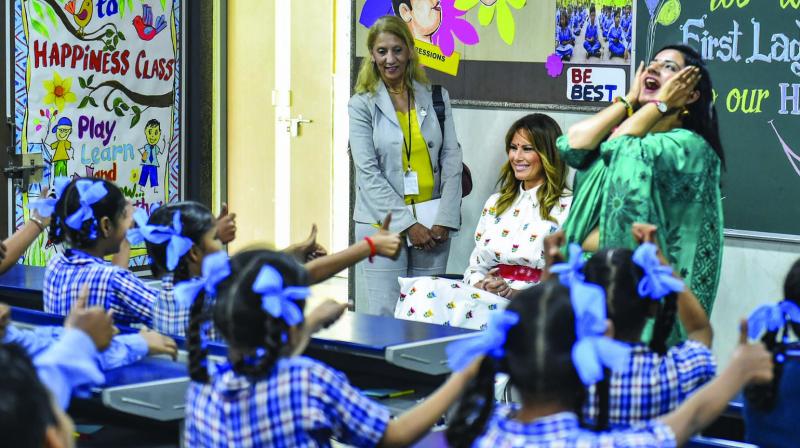 US First Lady Melania Trump witnesses an activity demonstrated by a teacher and school children in a happiness class during her visit to a government school in New Delhi on Tuesday. (Photo: PTI)

New Delhi: “What is your name?” “What do you do?” “ How far is America from here?” “Is it very big? Which is your favourite cartoon?” — These were some of the questions tossed at America’s First Lady Melania Trump when she visited the Delhi government-run Sarvodaya School at Moti Bagh here.

Ms Trump wanted to see how Delhi government schools teach “happiness” in their classes. The school was picked mainly for its logistics and its proximity to ITC Maurya, the hotel where the Trumps were staying, and the US embassy.

“My name is Melania Trump.” “I am the First Lady of the United States.” “My favourite cartoon is Tom and Jerry,” Ms Trump responded. For the rest of the questions, all she had was a big smile as an

Ms Trump spent over an hour at the school, interacting with students from Kindergarten to Class 4. She saw activities where kids were reading books, building blocks and busy colouring. She then visited a class where a yoga session was on.

Finally, she entered the “Happiness Classroom” where she meditated with the children. Everyone was asked to close their eyes and focus on their breathing. After the brief meditation, the children were asked by the teacher to explain how they felt. Some said they felt fresh and some said they felt good. “I felt very relaxed,” said Ms Trump after the meditation session.

“Namaste! It was an honour to join you today in this beautiful school. Thank you for welcoming me. This is my first visit to India. People here are so welcoming and kind. The President and I are grateful for the warm reception,” she said.

“I was able to see the concept of ‘prosperity for all’ in spirit and enthusiasm. It is very inspiring that students begin their day by practising mindfulness and connecting with nature. A healthy, positive example has been set for educators to ensure a promising future. The Happiness Curriculum must be implemented not only in America but across the world,” she added.

Ms Trump was given a warm welcome and she was seen clapping during the dance performances by children that later saw the entire gathering dancing to bhangra. In fact, it started when a Sikh boy sitting in the last row got up from his seat and started doing the bhangra when the performance started on stage, giving a nightmare to the US Secret Service, whose officers ran towards the child. But soon they realised this was India, where breaking into bhangra was not only normal but contagious too, as several other children too started dancing. With their teachers seated far away from them, they had no one to discipline or stop them. In fact, their teachers, from a distance, were filming videos and swaying to the music. Ms Trump clearly enjoyed every bit of this and walked up to the students to shake hands before leaving.

Happiness is a state of mind. But sometimes it needs outside support to feel it. Sarvodaya School in New Delhi’s Moti Bagh is just a regular neglected government school minus the basic infrastructure and happiness that it has today. Its classes, restrooms and overall infrastructure can today beat top Delhi private schools.

It is a different matter that younger students are yet to get the right exposure. Six-year-old Bhanu (name changed) comes from a poor family. He has never had a McDonald’s burger or known about KFC meals because his parents can barely afford proper meals. All he knew was that some “mantri” had come to the school. His senior Kapil of Class 1 said “Millenium Trump” (for Melania Trump) had come, but did not know who the person is and why she is important. However, for some students from senior classes, there was awareness about the President and First Lady. And with the entire media paying huge attention, the students realised that it was a memorable moment for them.

Later, deputy chief minister Manish Sisodia, who is in charge of education, tweeted: “Welcome to our school @FLOTUS! We hope you would have a great time here in HappinessClass. It’s just 18 months old initiative but early results have made us confident that @HappinessDelhi is the ultimate solution to all violence & hate in mindsets that we are facing worldwide. Its a proud moment for my Team Education of Delhi today. All are excited to see.”