The Rudra Tandava is said to depict his violent nature – first as creator and later as the destroyer of the universe. 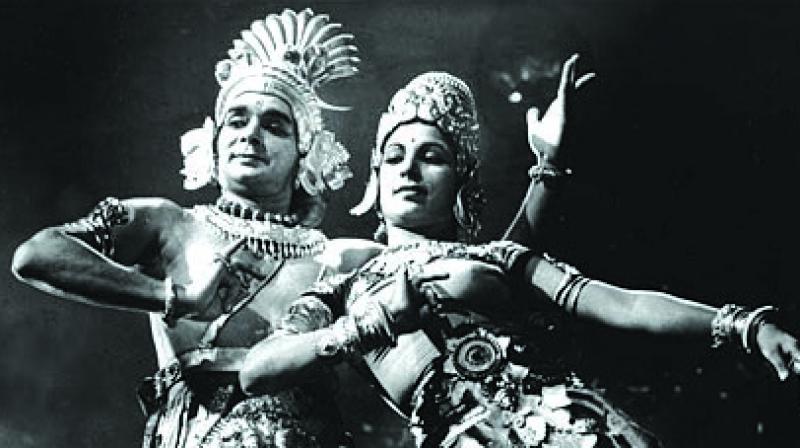 It suddenly struck me that India might benefit at this time with a boost of Uday Shankar’s Tandav Nritya! This divine dance performed by Lord Shiva is described as a vigorous dance that is the source of the cycle of creation, preservation and dissolution. The Rudra Tandava is said to depict his violent nature – first as creator and later as the destroyer of the universe.

I was fascinated by a dancing bronze Nataraj as a child and was thrilled when the family decided see a dance performance by Uday Shankar and his troupe, at the now extinct New Empire at Calcutta. You can imagine my excitement when a live dancing Nataraj and Parvati appeared on the stage! The performance had an enormous effect on me as it probably did on all the others in the hall. I was around seven years old at the time and to everyone’s amusement, for the next month or so, I kept falling down while trying to pose as Uday Shankar’s Nataraj.

It was however many years later that I realised just how privileged I had been, to have seen his performance when I learnt that he had also performed with the famous Russian ballet dancer, Anna Pavlova. My father, who had become a great admirer of the guru, also took the family to see Uday Shankar’s film Kalpana in 1948, which is said to have been partially based on Uday Shankar’s life.

Uday Shankar Chowdhury was born in Udaipur, Rajasthan on December 8, 1900, to a Bengali family from Narail, now part of Bangladesh. He was the eldest son of Shyam Shankar Chowdhury, a noted barrister, who was at the time employed by the Maharaja of Jhalawar. Shyam Shankar was given the title of Harchowdhry by the Nawabs, but he decided to only use Chowdhury as his surname. Shyam Shankar had five sons — Uday, Rajendra, Debendra, Bhupendra and Ravi — all of whom only used Shankar as their surnames.

Uday Shankar’s father was a Sanskrit scholar who graduated with honours from the Calcutta University and later studied at Oxford University where he became Doctor of Philosophy. The boys remained at their maternal uncle’s house at Nasratpur. Uday studied in various places, Nazratpur, Gazipur, Benaras and Jhalawar — learning music, photography, drawing and crafts. Interestingly, he does not seem to have learnt from any dance guru, at any of these cities.

At the age of 18, he was sent to Mumbai to study at the J.J. School of Art in Bombay and later to Gandharva Mahavidyalaya. By this time Shyam Shankar had resigned his post in Jhalawar and moved to London, where he married an English lady and practised law, before he became an amateur Impresario, introducing Indian dance and music to England.

Uday joined his father in London and joined the Royal college of Art and studied under Sir William Rothenstein. He also danced at a few charity performances organized by his father. On one of these performances, the famous Russian ballerina Anna Pavlova happened to be present.

While Uday Shankar did not have any training in the classical dances of India, he had been exposed both to classical dance and folk dances of various regions in India. In his stay in Europe he was also exposed to ballet and decided that he would create a new dance form by bringing the major elements of both these dance styles and named it “Hi-dance”. He studied the Rajput and Mughal styles of painting at the British museums and translated classical Indian dance forms, to create the movements. During his stay in London, he met and saw the performances of many performing artists. In the meantime, he was offered the “Prix de Rome” scholarship by the French Government and left for advanced studies in art in Rome.

His ideas of transforming Indian dance into contemporary form began to crystallize — and this was when he met Anna Pavlova for the first time. She was looking for artistes to collaborate on themes based on India. Out of this meeting a number of famous ballets with Indian themes were created — “Radha-Krishna” was a duet with Anna Pavlova, and “Hindu Wedding”, as part of her production “Oriental Impressions”. Uday Shankar continued to choreograph ballets on Indian themes, such as one created on the Ajanta Cave frescoes, which was performed in United States. By this time, the earlier name of his style of dance, changed from “Hi dance” to “Creative Dance”! Uday worked with Anna Pavlova for a year and half, before branching out on his own in Paris.

In 1927, he decided to visit India and with him came a French pianist Simon Barbiere, who was his disciple as well as dance partner and Alice Boner who wanted to study Indian art history. Rabindranath Tagore welcomed Uday Shankar and tried to persuade him to open a performing arts school in India. On his return to Paris in 1931, he founded Europe’s first Indian dance company along with Alice Boner, who was now another of his disciples. With musicians Vishnu Dass Shirali and Timir Baran, Uday Shankar created special music to accompany his new dance styles. His first dance performance was on March 3, 1931, at the Champs-Elysees Theatre in Paris — a theatre that became his base as he toured through Europe.

Uday Shankar’s seven-year tour through Europe and America with his own troupe was a grand success. His first performance at the US was in January 1933 in New York City, along with his dance partner Simkie, a French dancer. Thereafter the troupe set out for an 84-city tour through the country. His amalgamation of the theatrical techniques of European and Indian dances was highly appreciated both in India and abroad. While Uday Shankar was reaching out with a new era of traditional style temple dances, his brother Ravi was also helping by popularising Indian classical music abroad.

In 1938, Uday Shankar made India his base and established the Uday Shankar India Cultural Centre at Simtola, three kilometres from Almora in Uttarakhand. He invited famous dance guru’s to join him — Sankaran Namboodri for Kathakali, Kandappa Pillai for Bharatanatyam, Ambi Singh for Manipuri and Ustad Allauddin Khan for music. Soon he had a large group of artists and dancers, including Guru Dutt, Shanti Bardhan.Ruma Guha Thakurta, Prabhat Ganguly, Zohra Sehgal, Uzra, Lakshmi Shankar, Simkie, Amala, Satyavati, Narendra Sharma. His brothers Rajendra, Debendra and Ravi joined him as students.

The centre closed down in 1942 — during the war years due to lack of funds. However, it appears that the building may be resurrected sometime soon. This was when Uday Shankar, then married to Amala Shankar, decided to go to southern India to make his film, Kalpana, in 1948. It was filmed at the famous Gemini Talkies and is based on his style of dance in which both he and his wife, Amala, perform. Uday Shankar decided to settle down in South Calcutta in 1960. His house in Ballygunge is where the Uday Shankar Centre for Dance was opened in 1965.

Uday Shankar was a unique personality and a true artiste. He is known for creating a style of dance that is an amalgamation of European theatrical techniques with Indian classical, tribal and folk styles of dance. He leaves a legacy of dance that remains for dancers to remember. His wife, Amala Shankar, insists on an overall development of dancers and the students, who are also taught costume and stage design. She was awarded the Padma Bhushan in 1991. A living legend at 99 years, she took Shankar’s work as her life’s mission. Son Ananda Shankar’s wife, Tanushree, continues to teach and perform his style of Indian modern dance, through the Tanushree Shankar Dance Company. Also based in the city, his legacy is also carried forward by daughter Mamata Shankar through her institution, Udayan Kala Kendra.

The writer is an author, a professional communicator and an intrepid traveller