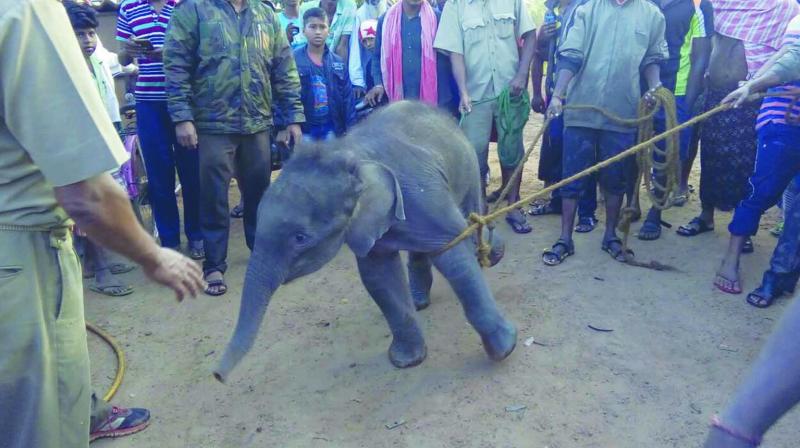 An elephant calf which strayed into human habitation in search of water and fell into a well at Khurda near Bhubaneswar.

Bhubaneswar: With lessons learnt from the recent forest fire tragedy in Tamil Nadu that claimed 20 lives, the Odisha government has prepared an action plan to not only prevent such tragedies but also save the precious flora and fauna  that contribute to maintaining ecological balance.

“If we can track the fires immediately through satellite, a lot of damage can be prevented. We will be able to prevent damage as currently we act only after fires spread. So, I think we are taking a rigorous approach this time,” Odisha’s principal chief conservator of forests (wildlife) Sandip Tripathy said.

Banigochha and Daspalla forests in Nayagarh to buffer zones in Similipal National Park, including Dengam, Matihudi and Badakhaman regions in Mayurbhanj and Dandakaranya forests in Malkangiri districts have reported recurrent wild blazes this year. The environmentalists, however, do not think the measures are adequate enough to protect forest fires.

“Forest conservation committees comprising locals should be actively involved with forest personnel in dealing with the forest fires. They should be trained and provided orientation for the same. Even though we have suggested several such measures, the government is not using them properly,” environmentalist Biswajit Mohanty said.

Wildlife experts have pleaded for proper forest fire management plan. “Though the state government had, in principle, agreed to create a state-level control room to disseminate information about forest fires and mobilise manpower and resources to douse them, but no such control room has been set up till date. Wild animals in almost all forest ranges in Odisha are now being annihilated due to rising number of fire incidents. Water sources inside the forest are fast drying up due to the heat conditions. Wild animals, which stray into human habitations get killed by local people,” says Dr Gouranga Charana Rout, honorary wildlife ward, Rayagada.

Fires have caused widespread damage to valuable medicinal plants and timber wood and are a threat to the flora and fauna. Not only that, air pollution also looms large on nearby regions.

Recently, the state government has devised an innovative approach for efficient and effective tracking and prevention of forest fires. The state forest department has designed a special app to quickly track and effectively fight forest fires during summer.

A WhatsApp group called “Forest Fire Alert” has been created for sharing alerts and information to facilitate tracking, preventing and fighting such fires.

The adverse impact of a forest fire has resulted in wild animals such as leopards, elephant, wild boars and bears straying into human habitation, including the village on the outskirts of Bhubaneswar, in search of food and water.

According to Mr Mohanty, raging forest fires close to national highways, state highways or major roads are unpardonable. The state government must take advantage of the road connectivity to effectively extinguish fires before they spread to wider areas and wreck havoc.

“It is shocking that along several national highways and state highways criss-crossing the province, one can invariably find forest fires during summers. The government must fix responsibility on field-level officials at least for roadside forest fires,” Mr Mohanty added.