First meet between leaders after loss in Gorakhpur, Phulpur bypolls. 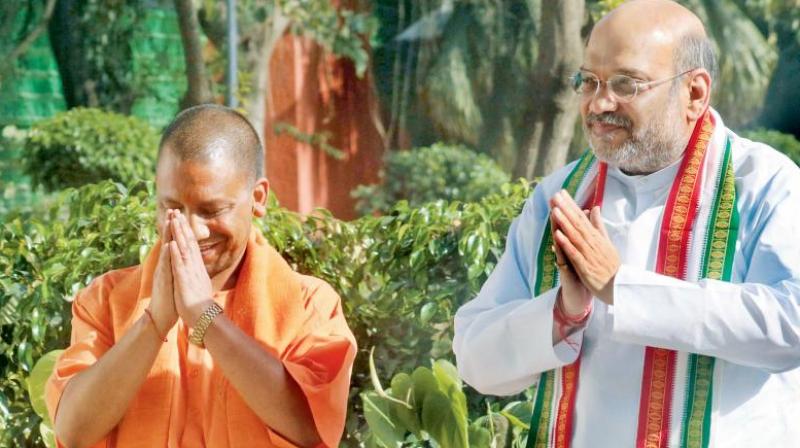 New Delhi: Uttar Pradesh chief minister Yogi Adityanath on Sunday met BJP president Amit Shah at the latter’s residence. The meeting, which lasted for more than an hour, was the first between the two leaders after the loss in Gorakhpur and Phulpur bypolls and the recent Rajya Sabha’s poll in which the BJP outmanoeuvred the regional satraps — SP and BSP — to get its nine candidates bag the 10 seats falling vacant in this politically crucial state next month.

The Uttar Pradesh chief minister also visited his ailing father at the AIIMS. Other than the loss in bypolls, the two leaders, it was learnt, also discussed the coming Kairana Lok Sabha and Noorpur Asse-mbly bypolls, ally Suhel-dev Bhartiya Samaj Party (SBSP), which wants to rethink about its alliance with the BJP and the eme-rging political situation in the state amid reports that Ms Mayawati-led BSP and one-time arch rival SP could join hands for 2019 Lok Sabha polls. Both the parties had allied for the Gorakhpur and Phulpur bypolls and had heavily dented BJP’s prosepects.

Sources disclosed Yogi Adityanath, who had also blamed “overconfidence” among the party cadre for the loss in bypolls, apprised the BJP president about what went wrong in party’s strategy for the Gorakhpur and Phulpur parliamentary bypolls, which the party lost to Akhilesh Yadav-led SP candidates with a huge margin. Both the constituencies are considered important as Gorakhpur was represented by the chief minister himself and Phulpur was represeted by his deputy Keshav Prasad Maurya till they entered the state assembly.

More than the poll verdict it was the political message that the BJP poll managers were distressed about as it was in nearly three decades that Gorak-hpur was “lost” to “non-representative” of the Gorakhnath Matth. The BJP had won Phulpur for the first time in 2014 only.

Mr Shah is also expected to visit UP next month and is likely to hold deliberati-ons with leaders over various state related and orga-nisational issues, including rift with the ally. The BJP ally Omprakash Raj-bhar-led SBSP’s two MLAs had voted against the BJP candidate in the RS polls, amid growing rift between the two allies. Though Mr Shah had met Mr Rajbhar recently, the latter, it was learnt, is not happy with the way the BJP is treating its ally in the state.

The coming Kairana parliamentary and Noorpur Assembly bypolls are also crucial as speculation is rife that RLD’s Jayant Chowdhary could be the Opposition’s candidate in this Jat-dominated seat in the western UP. There are also reports of infighting within BJP’s late leader Hukum Singh’s family over who should represent the Kairana seat after him. Noorpur was also represented by the BJP.