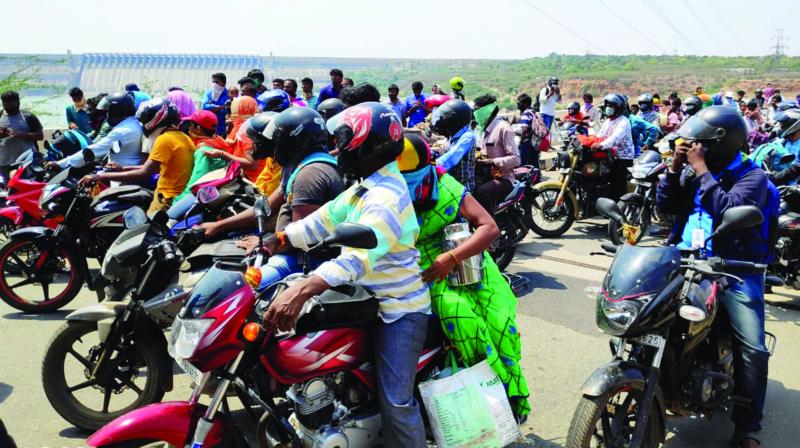 People trying to reach destinations in Andhra Pradesh being stopped at the inter-state Telangana-Andhra Pradesh border at Vijayapuri South on March 25, 2020. These people were returning from Hyderabad and other places in Telangana following the nationnwide coronavirus lockdown. (DC Photo: Tejo Roy)

Vijayawada: Less than 24 hours after a nation-wide 21-day lockdown was announced, the Telangana police issued passes to people—“only those who have their own means of transport”--to travel to their native places, mainly in Andhra Pradesh.

This triggered an exodus of people trying to reach their destinations. Several women students and workers had to travel nearly 200 km on two-wheelers in their eagerness to reach their native place.

The crisis deepened further with the Andhra Pradesh police stopping them from entering their jurisdiction, resulting in a massing of evacuees at border points. People were stranded on the roads late into the night.

Women pleaded to be let through so they could travel onward to their destination.

The Andhra Pradesh health authorities complained to chief secretary Nilam Sawhney and the Chief Minister’s Office against the risk such an influx of people from Hyderabad would bring.

“We can’t rule out the possibility of some of the entrants being carriers of the coronavirus,” a senior doctor who is involved in coronavirus combat told Deccan Chronicle, speaking on the condition of anonymity. “We told higher authorities that we are already exhausted and can’t take a further workload.”

In Andhra Pradesh, the ruling YSR Congress Party and the opposition Telugu Desam both welcomed “our own people.”

While TDP leaders questioned the stopping “of our own people from entering our state,” YSR Congress MLA S Udayabhanu went to a border point and tried to persuade the police to let them through.

Later, the government issued a press release stating that municipal admin minister Botsa Satyanarayana spoke to his Telangana counterpart K.T. Rama Rao and brought to the latter’s notice that it was “not advisable” at this juncture for people to travel. The official press statement added that officials of the AP CMO and chief secretary also spoke to their Telangana counterparts.

With several border crossings on National Highway 65 logjammed, many people tried to take detours but were obstructed at several places by local villagers. There was tension in some areas like Budhavaram.