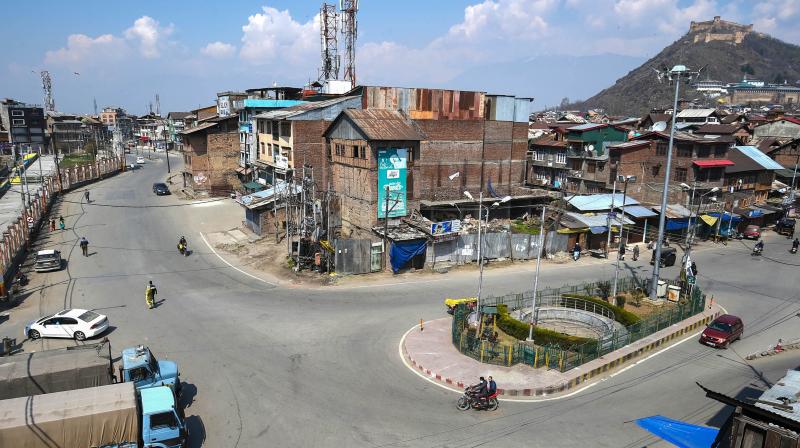 With this Jammu and Kashmir has recorded first death due to the virus. Ten other people are being treated including seven in the Valley and three in Jammu region of the Union Territory after testing positive for COVID-19. Thirteen more such patients are admitted at a Leh hospital.

The man who died in Srinagar hospital had a medical history of illness with sugar, hypertension and obesity. The doctors said he suffered a massive cardiac arrest and their effort to revive him failed.

"Despite our best efforts, the COVID-19 positive patient at Chest Disease Hospital, passed away due to cardiac arrest. The patient had medical history of prolonged illness with sugar, hypertension andobesity," one of them said.

Originally a resident of the Valley's north-western Sopore town, he had contracted the deadly virus while attending the public outreach programme of Tablighi Jamaat for spreading the faith in various parts of the country.

"The patient had returned from New Delhi, Uttar Pradesh and Jammu recently after being part of a Tablighi Jamaat attended also by people from Indonesia and Malaysia", a government official said.

The J&K government has ordered inquiry into the alleged mishandling of the patient after he was tested positive for COVID-19  at the CD hospital. "Apparently, he was not handled as per the protocol required for treating such patients", said an official who wished not be named.

He said that the hospital administration even after knowing the travel history of the patient and observing the symptoms of COVIC-19 in him did not bring it into the notice of divisional or district or the police authorities when he left the hospital without getting admitted.

As per official sources, the patient was given ample time to spread the virus by intermingling with the public and relatives.
Kashmir's Divisional Commissioner Kashmir P. K. Pole was quoted by local news agency KNO as saying “I have ordered for a probe to find out whether the case was mishandled and protocol was followed or not."

On Wednesday, chaotic scenes were witnessed at hospitals and various other medical facilities in the Valley’s Baramulla and Bandipore districts with panic-stricken residents who had met this person or attended religious gathering he too was a part of arriving at these in large numbers to offer themselves for COVID-19 tests.

Meanwhile, the J&K police and Central armed police forces are on the eighth day running Thursday enforcing restrictions strictly across the Valley as part of a lockdown aimed at limiting the spread of COVIC-19.

The police have arrested more than three hundred people or registered cases against them under the relevant provisions of law after they were found violating restrictions in force in the Valley since Thursday last.

The police and district administrations have also sealed a couple of dozen hotels and restaurants across the Valley after these were found functioning despite the closure order issued by the government under Section 144 CrPC and the Disaster Management Act, 2005. The official sources said that as many as 218 FIRs were registered against the lockdown violators till Wednesday.

The lockdown is being enforced strictly also in Jammu region of the UT whereas tougher measures are in place in Ladakh. Lieutenant Governor, Girish Chandra Murmu, on Wednesday appealed the people to observe the 21-day lockdown earnestly “to break the transmission chain and contribute in the fight against the spread of deadly COVID-19”.