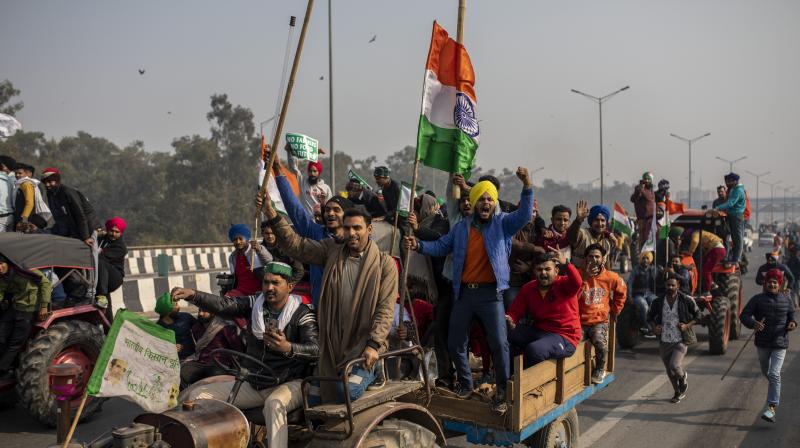 A group of farmers who were holding a protest in Zirakpur and Kharar towns in Punjab, both on the outskirts of Chandigarh, said they were allowing ambulances and other emergency vehicles to pass. (AFP file photo)

Chandigarh: Farmers gathered at several national highways, key roads and some railway tracks in Punjab and Haryana on Friday morning as part of their nationwide protest against the Centre's new agri laws.

According to the Samkyukta Kisan Morcha (SKM), the Bharat Bandh is being observed from 6 am to 6 pm to mark four months of the farmers' agitation at Delhi's three borders -- Singhu, Ghazipur and Tikri.

Heavy police force has been deployed in the two states as part of security measures, an official said.

The farmers have gathered at several highways and roads in the two states including in Bathinda, Ludhiana, Amritsar, Patiala, Mohali, Rohtak, Jhajjar and Bhiwani districts.

A group of farmers who were holding a protest in Zirakpur and Kharar towns in Punjab, both on the outskirts of Chandigarh, said they were allowing ambulances and other emergency vehicles to pass.

Some of the protesters blocked the Ambala-Delhi highway near Ambala Cantt, police said.

While another group squatted on a railway track near Shahpur village, around five kilometers from Ambala Cantt, due to which all the trains running between Delhi and Saharanpur were stranded, railway officials said.

The farmers also blocked the Ambala-Rajpura Highway on the Haryana-Punjab border near Shambhu barrier, and the Ambala-Hisar Highway near Ambala City.

Blockades on various state highways were also reported in Naraingarh and Mullana in Haryana, police said.

The SKM, an umbrella body of protesting unions, appealed to protesting farmers to be peaceful and not get involved in any kind of illegitimate debate and conflict during the 'bandh'.

"All shops, malls, markets and institutions will remain closed under complete Bharat Bandh. All minor and big roads and trains will be blocked. All services will remain suspended except for ambulance and other essential services. The effect of Bharat Bandh will be observed inside Delhi as well," SKM had said in a statement.

Farmer leaders have said road and rail transport will be blocked and claimed that markets will also remain closed.

They also claimed that trade unions from organised and unorganised sectors, and transport and other associations too have extended support to the call for Bharat Bandh.

SGPC president Jagir Kaur had said on Thursday that its offices would be kept closed on Friday in support of the Bharat Bandh.

Thousands of farmers, mainly from Punjab, Haryana and western Uttar Pradesh, have been camping at Singhu, Tikri and Ghazipur demanding a complete repeal of the three farm laws and a legal guarantee for the minimum support price on their crops.

The statement issued by the SKM claimed that various farmers' organisations, trade unions, student organisations, bar associations, political parties and representatives of state governments have supported its call for a nationwide protest.

Apart from repealing of three farm laws, the demands of protesting unions include cancellation of all police cases against farmers, withdrawal of electricity and pollution bills, and reduction in prices of diesel, petrol and gas.

So far, there have been 11 rounds of talks between the protesting unions and government, but the deadlock has continued as both sides have stuck to their stand.

In January, the government had offered to suspend the farm laws for 12-18 months, which was rejected by the farmer unions.

The Delhi Police on Friday closed both carriageways of National Highway-24 passing through the Ghazipur border in view of the 'Bharat Bandh' called by farmer unions protesting against the three agri laws.

In a tweet, the Delhi Traffic Police said, "Traffic movement is closed on Ghazipur Border NH-24 (Both carriageways)."

The one side of the carriageway was earlier opened on March 15 for traffic. However, the other side from Ghaziabad towards Delhi is closed since the farmers' protest started.

The Delhi Police has said adequate security arrangements have been put in place in view of the bandh.

Delhi Police PRO Chinmoy Biswal had said there will be intense patrolling to maintain peace in the national capital.

"There will be adequate security arrangements in all police districts during the bandh.

"The patrolling staff will roam in their area throughout the day and their focus will be to maintain peace in busy marketplaces," Biswal had said.