Kashmir: Is the soldier only meant to ‘do and die’?

On countering the death penalty to Jadhav, the move suggested by Dr Subramanian Swamy has the potential to hit Pakistan hard. 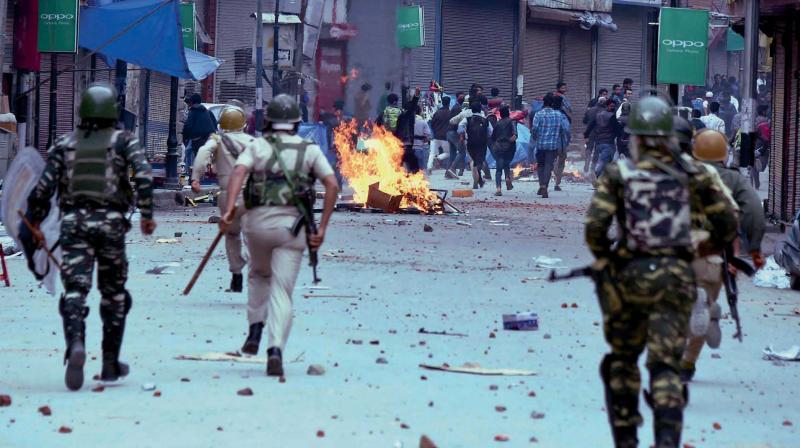 Police and CRPF in action against students throw stones on them during clashes in the vicinity of Lal Chowk in Srinagar.

Two developments — one recently in Pakistan and the other since long at the behest of Pakistan’s Army and government in the Kashmir Valley — expose Pakistan like never before as not merely a rogue state but a veritable liability for peace in the entire South Asia region, given the allegations by Afghanistan and Bangladesh of Pakistan’s disruptive activities in both those countries also.

However, it is on Pakistan announcing death penalty for retired Indian Navy commander Kulbhushan Jadhav, following a ridiculous Pak Army kangaroo trial pronouncing him to be an Indian spy and terrorist as well as its poisoning of minds of Kashmiris in the Valley, that warrant stern and swift actions by New Delhi.

On countering the death penalty to Jadhav, the move suggested by Dr Subramanian Swamy has the potential to hit Pakistan hard. After Osama bin Laden’s killing when Pakistan created problems for movement of Nato stores, a resolution was moved by a group of US Congressmen calling for right to self-determination for the Baloch people. The House of Representatives’ Resolution which was moved stated that in Pakistan the Balochi people are subjected to violence and extra-judicial killing and, therefore, the Balochi people “have the right to self-determination and to their own sovereign country; and they should be afforded the opportunity to choose their own status… The Balochi, like other nations of people, have an innate right to self-determination… The political and ethnic discrimination they suffer is tragic and made more so because America is financing and selling arms to their oppressors in Islamabad.” The statement explained that historically Balochistan was an independently governed entity known as the Baloch
Khanate of Kalat which came to an end after invasions from both British and Persian armies and that an attempt to regain independence in 1947 was crushed by an invasion by Pakistan.

In desperation, Pakistanis, in secret meetings with the US begged for some face-saving formula. The US agreed and publicly the Pakistanis again made a demand for an apology from the US government. On the July 12, 2012, the then US secretary of state, Hillary Clinton called Pakistan’s foreign minister Hina Rabbani Khar to “apologise”. Everyone knew that it was not Ms Clinton’s apology that made Pakistan relent, but the US Congress resolution on recognising Balochistan as an independent nation-state.

Dr Swamy’s suggestion includes the formation of a Baloch government in exile in India. On August 15, 2016, Prime Minister Narendra Modi’s reference to Balochistsn and Pakistan-occupied Kashmir (PoK) was followed by a wide reaction by the Balochi diaspora, including in India, when a number of their leaders spoke about Pak Army’s brutality against their brethren in Balochistan. On April 24, 2017, Dr Swamy reiterated his Balochistan related demand and violent anti-Pakistan protests erupted in PoK.

On Pakistan’s plans of poisoning Kashmiris, there is no dearth of visuals of crowds as large as over a thousand trying to heckle and humiliate personnel of the Army and Central Reserve Police Force. There have also been disturbing reports about threats to J&K police personnel and their families.

On April 9, in Budgam, ITBP and J&K police personnel were guarding a polling booth. When the polling was almost over, a mob of about 900 stone pelters attacked these personnel. There were only 9 security personnel to guard the polling booth versus a mob of 900. ITBP personnel realised that they would not be able to get out alive unless and until they did something. They sent out a SOS message to the Army, which immediately sent in a quick response team (QRT) with one jeep and one bus. When the QRT arrived, they too realised that it would be difficult to face a mob of 900. Major Litul Gogoi, the commander of the QRT, realising that it would be a bad idea to open fire at the mob and that rescuing the men inside is what was important, caught hold of one Kashmiri stone pelters, tied him on to the jeep and drove past the mob of 900. Not only did they go in, they saved the nine ITBP and J&K Police personnel, and managed to come out alive.

Although J&K Police has reportedly registered an FIR against unnamed Army persons, after many media visuals aired showing Kashmiri youth throwing stones and heckling and assaulting CRPF personnel who have been exercising much restraint, public revulsion against rioting Kashmiris is rising. Attorney-General Mukul Rohatgi did not mince his words in media, when he stated: “The recent report about a stone pelter tied to an Army vehicle, it helped contain stone pelters and saved the poll officials”.

An excerpt of former GoC-in-C, Northern Command Lt. Gen. D.S. Hooda’s open letter to Kashmiri youth of the Valley deserves mention: “…The globe is shrinking — opportunities present themselves around the world. You must look beyond the Kashmir valley and prepare yourselves well to step into this role. Unfortunately, it will not happen if your schools and colleges remain closed. Nelson Mandela said, ‘Education is the most powerful weapon which you can use to change the world’. Stones don’t even come a close second. It is for you to decide the path to take.”

Few verses of a poem penned by retired Naval commander S.S. Thatte titled: “The ‘Innocent’ Stone Pelter”, says it all:

Whenever there is a flood
The soldier pays with blood
Putting his own life on the line
So this youngster can stay fine
In his hour of desperate need
It is the Army which takes the lead
Reaching out when hope there’s none
Claiming no credits for deeds they’ve done
But all their selfless valour is in vain
The ingrate picks up the stone again!
At it again, yelling ‘Azaadi’, pelting stones
And laughing when he breaks some bones
When the Chief warns of retaliatory fire
He lands up in a political quagmire
In one voice, the journalists and politicians ask
Why shouldn’t the chief be taken to task?
Perhaps the question to be asked is “Why?”
Is the soldier meant only to “do and die”?

As per latest reports, 300 WhatsApp groups in Kashmir Valley with around 250 members involved in mobilising stone-pelters to disrupt security forces operations were disabled, resulting in much lower turnouts at encounter sites. On April 24, chief minister Mehbooba Mufti met Prime Minister Narendra Modi and home minister Rajnath Singh. Much more will need to be done to calm the Valley.