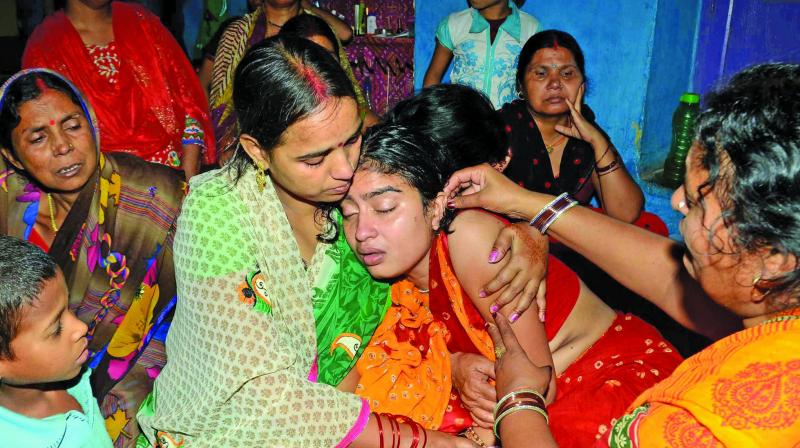 Family members mourn the death of CRPF jawan Saurabh Kumar in Danapur on Tuesday. Kumar was one of the 25 CRPF personnel killed in Sukma district. (Photo: PTI)

Burkapal: “Appearance of a woman in red sari near our camp had made me uncomfortable. Some unusual events had then followed. My worst fears came true when ear-splitting sounds of firing rattled our camp later. We sensed our Delta company was ambushed by Maoists. We then geared up to back them up”.

Manoj Kumar, who has been serving as medical staff in the Burkapal CRPF camp, barely 2 km from the site where 25 CRPF jawans were massacred by Maoists in a deadly attack on a road-opening party of security personnel in Chhattisgarh’s south Bastar district of Sukma on Monday, narrated events leading to the mayhem.

He recalled how a young woman in red sari surfaced near the camp in the morning barely jawans from the camp left for an operation to sanitise the nearby area to pave way for resumption of construction of a road along with a bridge.

“I have been posted in the camp for the past four years. I know every people in the nearby villages since I provide them medical treatment,” he said.

“I got curious about the mysterious woman since I have never seen her before. I enquired about her when two other women appeared near the camp later. But they misguided me saying that she was a newly married woman of the village,” he said.

“Later, I found out from the other villagers that the mysterious woman did not belong to their village,” he said.

As the backup team advanced he spotted the two women counting mangoes in a tree. The two women created a sound by beating two sticks they carried twice.

“This is system of alerting the Maoists about presence of security forces by their informers,” he said.

As the backup team was closing in the ambush site to rescue their colleagues trapped by Naxals, bullets fired by Naxals from houses and treetops in the nearby village greeted them.

They could manage to evacuate some injured jawans at the encounter site and bring them to the camp. “Our tragedy is that we never received any cooperation from local villagers despite the fact that I treat them regularly and saved many lives,” Mr Manoj who first gave first aid treatment to the injured jawans, said.

As many as 99 jawans of 74 battalion of CRPF had left Burkapal camp at 6 am on the fateful day to sanitise the construction site.