Uttar Pradesh Chief Minister Yogi Adityanath announces an ex-gratia of Rs 2 lakh to the kin of the deceased. 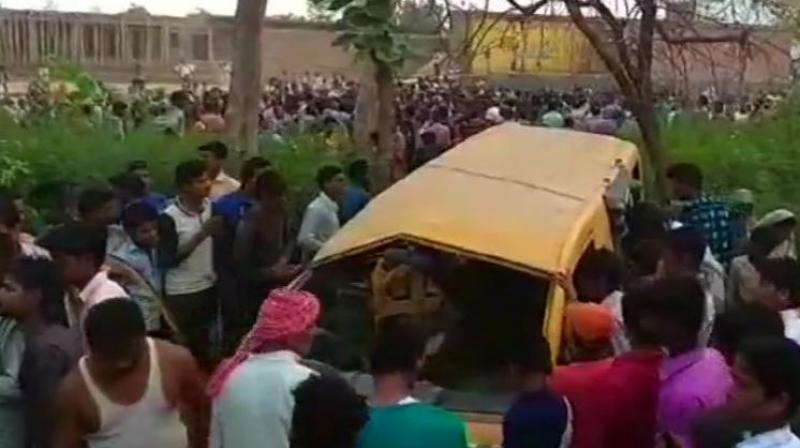 The vehicle collided with the train at an unmanned crossing in Kushinagar.

The children, students of Divine Public School, were killed on the spot when Thawe-Kapatanganj passenger train (55075) crashed into the van at an unmanned crossing gate at Behpurva, said Ved Prakash, spokesperson for Railways.

There were at least 25 people, including children in the van, most of whom were children below the age of 10 years, the official said. The train was on the way to Gorakhpur from Siwan, Uttar Pradesh.

Uttar Pradesh Chief Minister Yogi Adityanath expressed his deepest condolences on the unfortunate incident and directed District Administration to provide all help and medical aid to the victims.

He also declared an ex-gratia of Rs 2 lakh to the kin of the deceased and directed an inquiry into the cause of the accident.

Prime Minister Narendra Modi also expressed grief over the death of 13 school children, adding that the UP government and the railway department will take appropriate action in the matter.

Railway Minister Piyush Goyal ordered an inquiry into the Kushinagar train-school van accident and announced a compensation of Rs 2 lakh for the kin of the deceased.

The minister also said that the Railways will provide an ex-gratia amount of Rs 1 lakh for those with serious injuries and Rs 50,000 for those simple injuries.

"I received the unfortunate news of the death of school children. I have asked senior officials to conduct a probe into the incident. Railways will give a compensation of Rs 2 lakh to the kin of the dead over and above the aid announced by the Uttar Pradesh government," Goyal said in a tweet.

Spoke to Railway minister. Prima facie appears to be mistake of van driver, he had earphones on & there are questions over his age too. There are rules in place, inquiry will be conducted as to why they were not followed. Strict action will be taken: CM on #Kushinagar accident pic.twitter.com/PkQLtX6riy