How not to learn the lessons of history

Smart people draw lessons from their failures and when faced with similar problems again, try to avoid those pitfalls. 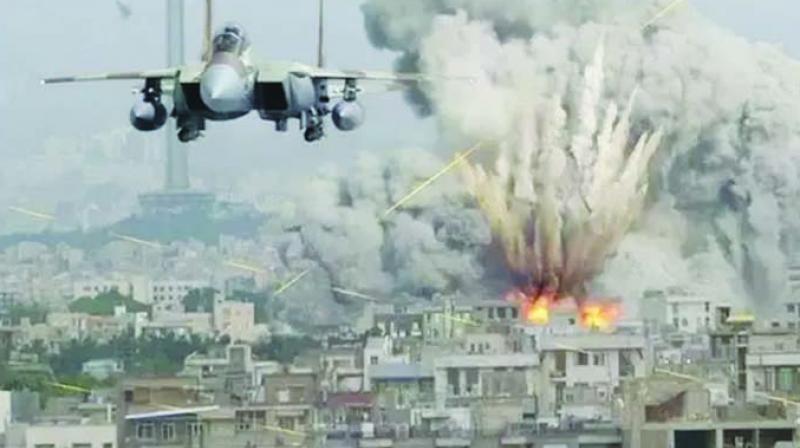 Iraq, Afghanistan, Libya and now Syria are living examples of the monumental failure of US foreign policy. Apparently, the US never learnt any lessons from the Vietnam war.

It is generally believed that detailed information helps make informed choices which produce better results. History is full of examples proving that the occupation of a foreign country has never endeared the occupying forces to the masses no matter how laudable the projected objective of the invasion might have been. And there are umpteen examples in history to demonstrate that even a militarily superior occupying force is destined to fail if the people of the occupied country are not with them. Surprisingly, the technologically, militarily and economically still the most powerful nation on earth doesn’t seem to understand these simple but time-tested home truths.

Smart people draw lessons from their failures and when faced with similar problems again, try to avoid those pitfalls.  When decisions are not based on facts but on manufactured facts, what we arrive at is not truth but negotiable truth. Then US secretary of state Colin Powell had presented a mountain of falsehood in the UN General Assembly on February 5, 2003 to make a case for the invasion of Iraq. A cross-section of post-invasion studies  have concluded that Saddam Hussein didn’t have any weapons of mass destruction, nor were there 18 mobile laboratories in Iraq for making anthrax and botulism, nor did Saddam try to buy large quantities of uranium from Africa as mentioned by President George W. Bush in his State of the Union address in 2003. Saddam hadn’t met Osama bin Laden, he didn’t support Al Qaeda nor did he pose an imminent threat to the security of the United States. Still, the only superpower in the world invaded a sovereign nation in violation of all canons of international law. Crude oil prices didn’t plunge to $12 a barrel as predicted by Paul Wolfowitz after the occupation of Iraq; while infrastructure and public utilities built over three decades were reduced to rubble; the dismantling of the Ba’ath Party and the Iraqi Army created a power vacuum, thousands of Iraqis lost their jobs and their livelihoods, normal life of ordinary Iraqis was disrupted beyond belief and degrading  and humiliating treatment meted out to Iraqi soldiers at Abu Gharib jail filled Iraqis with anger and hatred against the US. Any dispassionate analysis will give the maximum credit for the emergence of the Islamic State (ISIS) to the ill-advised invasion of Iraq and the manner it was administered after the fall of Saddam Hussein. After all, the first US administrator of Iraq who ruled by edicts allegedly siphoned off more than a billion unaccounted dollars in a short time!

“Mission Accomplished” was the backdrop of the announcement of the end of major combat operations in Iraq by George W. Bush on the aircraft-carrier USS Abraham Lincoln on May 1, 2003. A decade and half later, another US President tweeted about “a perfectly executed strike” by missiles at the alleged chemical weapon programme sites in Syria on April 13, 2018 and declared: “Mission Accomplished!”

The missile strike became breaking news for a while. But did it intensify the global war on terrorism or degrade the capabilities of ISIS, Al Qaeda and other terrorist organisations or facilitate the restoration of peace, order and normality in Syria or establish political stability in the region or create conditions for millions of terrified refugees who fled their country to return to their homes or  promote democracy and human rights or generate goodwill and friendship for the United States? What did the invasion of Iraq by George W. Bush or the missile strike in Syria by Donald Trump really achieve?  While their questionable actions might have massaged the bloated ego of the two Presidents, did they really serve the national interests of the US?

Iraq, Afghanistan, Libya and now Syria are living examples of the monumental failure of US foreign policy. Apparently, the US never learnt any lessons of history from the Vietnam war notwithstanding the memorial in Washington for over 58000 brave American soldiers who lost their lives fighting an unjustified and immoral war!

The use of chemical weapons is banned, so anyone using them must be punished. But why not collect irrefutable evidence before attacking the violators? Why should the world take every accusation by the US and a former colonial power in decline as the gospel truth? If the US can tell blatant lies to the world community and mount attacks against Iraq and destroy it terminally, why shouldn’t it be suspected of cooking up false evidence all over again? Beleaguered leaders don’t miss a chance to hog moments of media limelight. This was the case with British PM Theresa May, who loomed larger than life on every TV channel on April 14, giving briefings about the missile attack in Syria though her country had fired just six missiles! Let us rewind: It’s an open secret that during the Iraq-Iran war, Saddam Hussein had used chemical weapons against the Kurds. Why didn’t the US then punish the Iraqi dictator? They turned a blind eye; they were siding with Iraq against Iran. But what Iran couldn’t achieve in a decade-long debilitating war with Iraq was presented to them on a platter by the US by toppling Saddam Hussein!

Pictures of young Syrian children gasping for breath as a result of nerve gas attack will bleed every normal human being’s heart. They didn’t have to go through such an ordeal. But have Theresa May and French President Emmanuel Macron ever seen some of the footage of the US attack on Vietnam. In 1965-1973 the US dropped eight million tonnes of napalm bombs, three times more than the total amount used in whole of the Second World War! The Vietnam Red Cross Society recorded 4.8 million deaths; 400,000 children were born with deformities due to exposure to Agent Orange! The environmental damage inflicted by the US attacks can be gauged by the fact that 20 million gallons of herbicides and defoliants were used to completely destroy crops, plants and vegetations. It took 16 years for former US defence secretary Robert McNamara, the architect of the escalation of bombing in Vietnam, to admit: “We were wrong, terribly wrong!” Later, he also trashed the invasion of Iraq: “It’s morally wrong, it’s politically wrong, it’s economically wrong.”

Bombs don’t always bring about peace; democracy can’t be grafted from outside; replacing dictatorships with anarchy and lawlessness breeds terrorism, not democracy; being an international policeman and shunning a dialogue with those who disagree generates hatred, not friendship, and fighting wars on foreign soil cripples the economy badly.

Even after dismal failure of its policy in Iraq, Afghanistan, Libya and Syria, America’s leadership doesn’t show the courage to introspect, soul-search and undertake a course correction that will serve its national interests and also make the world much more peaceful.

The writer is a retired Indian diplomat