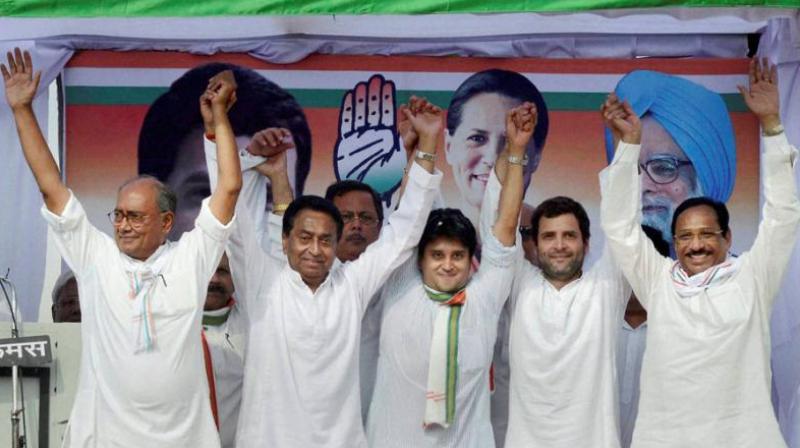 Bhopal: The decision to appoint Kamal Nath as the Madhya Pradesh Congress unit president and Jyotiraditya Scindia as the campaign committee chief is being seen as a balancing act in the faction-ridden party in the poll-bound state.

The appointment of Jyotiraditya Scindia, the Member of Parliament from Guna, as the campaign committee chairman will give the party a strong face against three-term BJP Chief Minister Shivraj Singh Chouhan, state Congress leaders feel.

"The move will balance the faction-ridden party in a major way as among all the top Congress leaders of the state, Nath's stature is very high and he has the capacity to take along all of them," a senior Congress leader told news agency PTI requesting anonymity.

There have been talks of internal factionalism in the party and its workers are said to be divided among four factions -- headed by general secretary Digvijay Singh, Nath, Scindia and Suresh Pachori.

Analysts feel the internal division could hurt the party's prospects in the assembly polls due later this year.

Madhya Pradesh Congress' chief spokesman KK Mishra exuded confidence that under the leadership of Kamal Nath, the party will work "unitedly" to form a government in the state.

Former Union minister Aslam Sher Khan said it was a welcome decision to appoint the nine-time Congress MP from Chhindwara Lok Sabha seat as the state unit president, though late.

"This will give necessary vigour to the Congress to take on the BJP, whose graph, and especially that of Chief Minister Shivraj Singh Chouhan, is falling at a fast pace in the state," Khan claimed.

Farmers are very annoyed with the BJP government as they are not getting due for their produce, said the ex-Olympian, who had been demanding Nath's appointment as the state party president for long.

"The schemes like 'Bhawantar' and the Minimum Support Price (MSP) have failed miserably. Besides, a strong anti- incumbency is prevailing in the state and this is the right decision taken by the party," the Congress leader said.

Khan also said Nath has the capacity to take along all senior leaders, including Digvijay Singh, Scindia, Leader of Opposition Ajay Singh, Suresh Pachouri, Kantilal Bhuria and Arun Yadav, among others.

Patwari said Nath's experience will play a major role in ending the "BJP's misrule" in the state.

Bala Bachchan said the Congress' decision will bring the desired results for the party in Madhya Pradesh.

"Under Nath's leadership, the people, who are fed up with the BJP, will get the much needed relief," he said.

Another party leader claimed that the Congress general secretary and former Madhya Pradesh chief minister, Digvijay Singh, played a major role in paving way for the appointment of Nath as the state party president.

"Singh had vocally supported Nath's candidature during his 'Narmada Parikrama Yatra' which concluded recently," he said.

Soon after his appointment, Nath assured to work with full dedication to defeat the "non-secular parties".

"I am committed to give my best to ensure the defeat of non-secular parties. As president, I will work dedicatedly and with full coordination to defeat the BJP and I thank Sonia Gandhi and Rahul Gandhi for reposing faith in me," Nath said in a tweet.