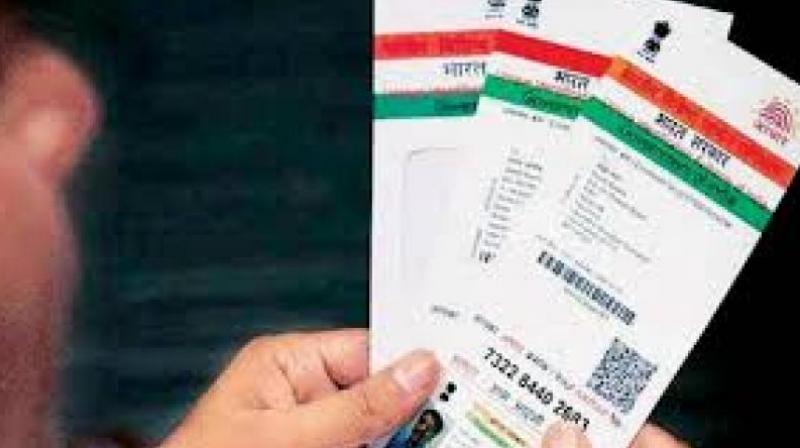 He said mere possibility of misuse of a law couldn’t be a ground to strike down its constitutional validity.

New Delhi: The NDA government is defending the policy decision of the previous UPA government which introduced Aadhaar-based identity for the citizens, argued senior counsel Rakesh Diwedi appearing for the UIDAI.

Mr Diwedi told a bench of Chief Justice Dipak Misra and Justices A.K. Sikri, A.M. Kanwilkar, D.Y. Chandrachud and Ashok Bhushan that the apprehension of surveillance of citizens or that the data being shared by the collecting entities were misplaced as these encrypted information cannot be shared. He also dispelled the impression that indirect surveillance of citizens was taking place through Aadhaar information.

Answering Justice Chandrachud, who questioned the proportionality of subjecting the entire population to the level of intrusion caused by Aadhaar linkage, Mr Diwedi said the information is absolutely safe and kept confidential and there is no question of data breach. He submitted that the present government is defending the policy decision of the previous government and Aadhaar has the approval of two governments. He also ridiculed senior counsel Kapil Sibal, who was the minister for information and technology when Aadhaar was pursued, to oppose in the court the Aadhaaar scheme.

He said mere possibility of misuse of a law couldn’t be a ground to strike down its constitutional validity. On Justice Chandrachud’s query as to what sort of controls and safeguards the UIDAI have to protect data breach in the absence of data protection law, Mr Diwedi said the Aadhaar law has much more safeguards than the law enacted by the European Union. He said the requesting entities would not provide any information about personal data and “we (UIDAI) do not know the location from where the authentication is sought and for what purpose”.

When Justices Sikri and Chandrachud wanted to know on the issue of telecom companies insisting on linking sim card with Aadhaar, Mr Diwedi quoted an apex court order passed in March 2017 directing such linkage.