They claim that they have been promised houses under the Indira Aawas Yojna by the government but nothing has happened so far. 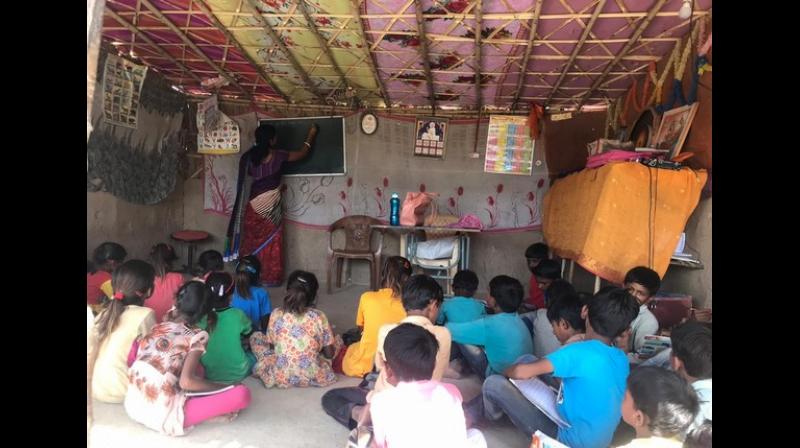 Hindus, who have migrated from Pakistan to India via pilgrim visa, are residing in pockets of Jodhpur. (Photo: ANI)

Jodhpur: Hindus who migrated from Pakistan to India say they are delighted with Prime Minister Narendra Modi’s promise of Citizenship Amendment Bill as possessing Indian citizenship means one step forward towards a better future.

For now, that dream seems entirely blurred in reality as migrants still hope to receive basic amenities, rehabilitation packages, medical and educational facilities. They claim that they have been promised houses under the Indira Aawas Yojna by the government but nothing has happened so far.

Hindus, who have migrated from Pakistan to India via pilgrim visa, are residing in pockets of Jodhpur. While speaking to ANI, these migrants expressed their happiness over Modi’s promise, of granting them citizenship, during his rallies in Barmer and Jodhpur.

Moolchand, who came from Sindh province, told ANI that due to forceful conversions to Islam and daily harassment in Pakistan, he decided to move to India.
“Women and girls cannot roam around freely in Pakistan. It gives a feeling that Modi delivers what he promises."

Lack of electricity, water supply and other amenities are a matter of concern and disappointment for this community. “Although I am happy that I'm in my own country, infrastructure like schools, hospitals and roads are not there. I would request the government to provide these at the earliest," said Moolchand.

Bhagwati, a migrant school girl from Mirpurkhas in Sindh, who is in India for the last three years said, "Young girls could not go freely in Pakistan. But here in India, the right to education is my right. Such right empowers women."

Underlying the need to get citizenship in India, Keshu Devi said: “I feel good in India but I want basic infrastructure. The idea of citizenship to Hindus is a matter of delight for us and if we become citizens of India then it would be the most delightful moment for us,” she said.

Lalchand, another migrant,  who aspires to be a doctor, said, “We were forced to read Islamic verses in Pakistan. I was even discriminated in the school as I was Hindu."
In order to give a bright future to the children of migrants, several NGOs have stepped up in the area and working towards their growth.

Manju Jain, a teacher who is helping these children for past one year said, “Government should also step up and help these students. We want them to stand up on their feet and become good citizens of the country."

Meanwhile, Human rights activist Hindu Singh Sodha welcomed the citizenship promise made by the Prime Minister but also expressed concern on the legal aspect of the provision for pragmatic implementation. "The government must handle such sensitive matters with care," she said.

The Citizenship Bill, which was passed in Lok Sabha on January 8, seeks to provide citizenship to non-Muslims from Bangladesh, Pakistan, and Afghanistan who came to India before December 31, 2014. Attempts by the Central government to pass it through the Rajya Sabha were stalled by the Opposition.

Under the proposed amendments in the Bill, the minimum residency period for citizenship was being reduced from the existing 12 years to 7 years. The citizenship was supposed to be given to them only after due scrutiny and on the recommendation of district authorities and the state government.