India   All India  26 May 2017  Mishra gives statement to Lokayukta on graft charge against Kejriwal
India, All India

Mishra gives statement to Lokayukta on graft charge against Kejriwal

Mishra has mentioned seven matters of 'corruption' including an 'exchange' of Rs 2 crore between Kejriwal and Satyendar Jain. 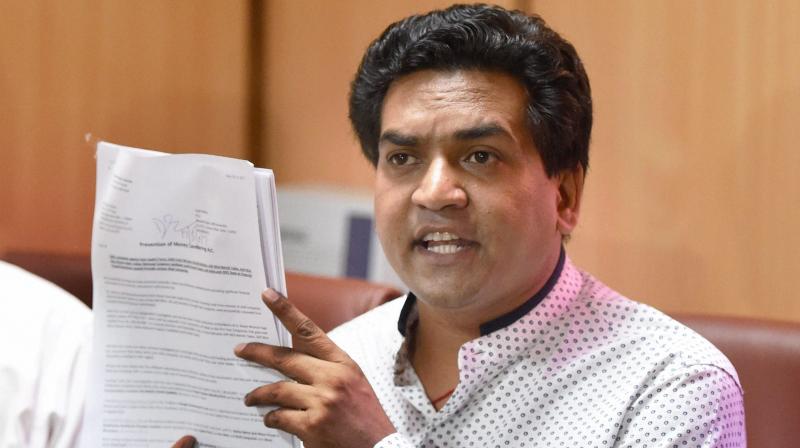 New Delhi:  AAP MLA and former minister Kapil Mishra on Thursday gave his statement to the Delhi Lokayukta over his allegations of corruption against Delhi Chief Minister Arvind Kejriwal and others.

Mishra has mentioned seven matters of 'corruption' including an 'exchange' of Rs 2 crore between Kejriwal and Health Minister Satyendar Jain.

"I have given statement on 7 serious issues of corruption by @ArvindKejriwal and his associates before Hon'ble Lokayukta," he said in a tweet.

The Lokayukta is mandated to enquire into corruption cases at state level.

However, Mishra did not submit any evidence with Lokayukta Reva Khetrapal, saying he would do so later as some of the evidences were with his associate and 'independent investigator' Neil Haslam, who was out of town.

Mishra said he would provide the date and the time of his visit to the chief minister's residence when Jain allegedly gave Rs 2 crore to Kejriwal in his presence after completion of the CBI investigation in the matter.

Latching on to the rebel AAP leader's statement, the Delhi unit of the BJP demanded that Kejriwal step down as the chief minister on 'moral grounds'.

"It is a very serious matter that a public representative has given a statement before the Lokayukta against Kejriwal and now he has no moral right to continue as Chief Minister," BJP's Delhi unit president Manoj Tiwari said.

The matters of corruption raised by Mishra in his statement included the water tanker 'scam', PWD 'scam' which involved Kejriwal's relative late Surender Bansal, foreign trips by five AAP leaders and funds obtained by the party allegedly from 'shell' companies.

Mishra was removed as Water Resources and Tourism minster from the Delhi cabinet on May 6 and had made the startling corruption allegation against Kejriwal the next day.

A complaint of 'corruption' against Kejriwal and Jain was filed by the Delhi BJP's legal cell following Mishra's allegation before the Lokayukta.

The Lokayukta had sent a notice to Mishra for recording his statement in connection with his allegation.