According to sources, Cong leaders ikely to fly to Delhi soon to discuss cabinet expansion with the high-command 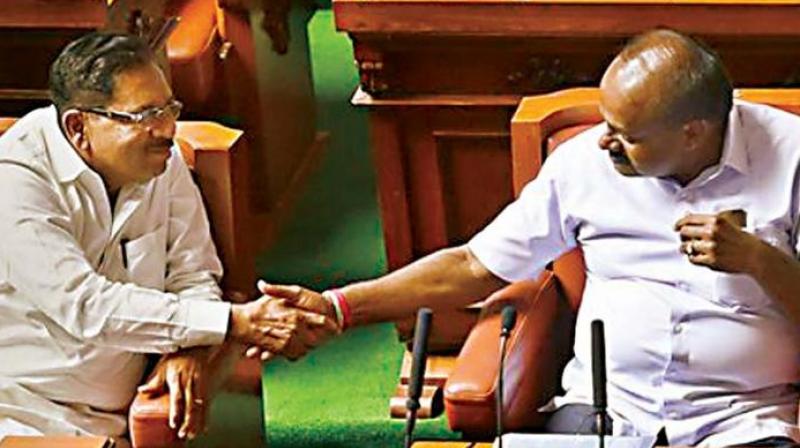 Bengaluru: Soon after Chief Minister H D Kumaraswamy proved his three-day-old government's majority on the floor of the assembly, parleys began between coalition partners Congress and JD(S) on cabinet expansion in Karnataka.

Both the coalition partners had earlier decided to discuss the cabinet expansion, after the trust vote.

According to sources, Congress leaders are likely to fly to Delhi soon to discuss with the high-command the cabinet expansion and allocation of portfolios.

Parameshwara had on Thursday said the coalition partners are yet to discuss the modalities on sharing of portfolios between both the parties, as also about Kumaraswamy continuing as chief minister for a full five year term.

It has already been decided that Congress will have 22 ministers and JD(S) 12, in the new cabinet.

With a growing number of aspirants for ministers posts in both parties, especially Congress, the leaders are up for a tough task.

Senior Congress leader D K Shivakumar, who emerged as a key figure in keeping party MLAs together before the trust vote of BJP's Yeddyurappa government, is reportedly upset over not getting the Deputy Chief Minister's post.

He is reportedly seeking a major portfolio along with the KPCC chief post, which Parameshwara is expected to vacate following his appointment as Deputy Chief Minister.

Leaders of the coalition parties are also likely to decide on a coordination committee soon, and will form an empanelled group to formulate a common minimum programme for the smooth functioning of the government.