Yeddyurappa said that his fight would not be against the Congress, but the corrupt, power hungry father-son combination. 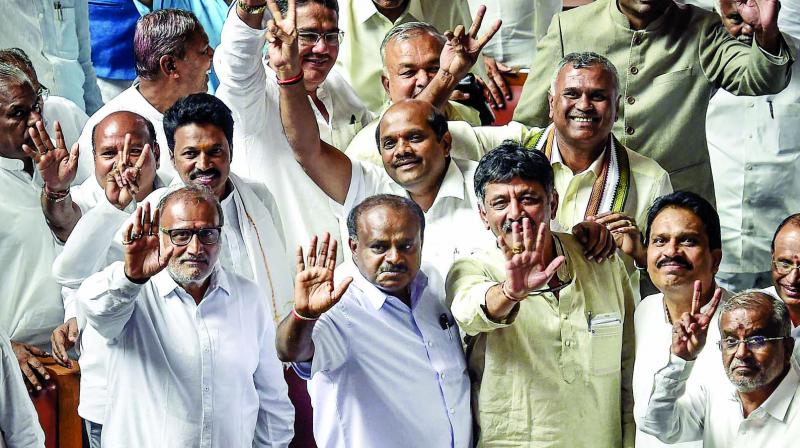 Karnataka CM H.D. Kumaraswamy, with other JD(S) and Congress leaders, waves to the media after his coalition government won the trust vote by voice vote at Vidhana Soudha in Bengaluru. (Photo: PTI)

Bengaluru: Karnataka chief minister H.D. Kumaraswamy won a vote of confidence by voice vote on Friday after BJP staged a walkout in the Assembly before the floor test, in an unexciting end to the 10-day high-voltage political drama after the polls yielded a hung House.

Mr Kumaraswamy’s motion seeking the confidence vote was declared passed by new Speaker K.R. Ramesh Kumar, a Congress MLA, who also got elected smoothly at the start of the day’s proceedings in the House after the BJP stood down from contesting the Speaker’s election.

Mr Kumaraswamy described the BJP walkout before the trust vote as “escapism” while defending his party’s decision to take Congress’ support to form the government. He promised “a new kind” of coalition government that would become a model for the country and complete its full term of five years.

“I have not become chief minister today happily. I have pain. I had placed several issues in front of people during election feeling that they will trust me, but people of the state have not shown trust in me,” he said.

“I’m not running a majority government, but people have not given majority to any one...They may have given you (BJP) 104, but it is not majority...,” Mr Kumaraswamy added.

Hitting out at the Opposition BJP, the chief minister said, “You (BJP) may be feeling that this government will go in two or three months, it will not go in two months or one month, but will stay with stability for five years.”

HDK appealed to members of the Opposition to lay politics to rest and concentrate on development of the state and promised to also stop criticising them. The CM also took a dig at Prime Minister Narendra Modi, who had tweeted that in Karnataka no party other than BJP could form the government, and also the new leader of the Opposition and former chief minister B.S. Yeddyurappa, who had said that he approached Opposition MLAs to ensure that the democratic institutions were saved under PM Modi at the Centre and himself in the state.

Mr Kumaraswamy wondered if the BJP held any contract for saving democracy in the country and reminded them that one of their ministers had spoken about changing the Constitution.

The chief minister took on the BJP, which was his coalition partner during his last stint in power in 2006, with the old coalition partners sparring on the floor of the House, exchanging accusations and viciously running each other down.

Mr Yeddyurappa warned the Congress to be careful of the “appa-maga”, the father-son party as he described the JD(S), recalling his 20-month association with it as “the biggest mistake of his life”. He warned that the father-son duo destroy everyone who helps them.

Mr Yeddyurappa said that his fight would not be against the Congress, but the corrupt, power hungry father-son combination.

He also used terms like “betrayers”, “cheats”,  “frauds”, “destroyers” and many more words against Mr Deve Gowda and Mr Kumaraswamy. He also said that Congress leaders would soon regret their decision to suspport the JD(S).

Even before Mr Kumaraswamy could reply to his allegations, Mr Yeddyurappa and BJP members staged a walk out in the House.

Shortly before the start of the proceedings, BJP’s MLA Suresh Kumar said he was withdrawing his nomination following a direction from the BJP leadership.

“On the directions of our party, I had filed the nomination for the post of Speaker. Now, after discussion in the party, it is felt that the Speaker has to be elected unanimously following the parliamentary traditions. I’m withdrawing my nomination,” Suresh Kumar tweeted.

”I should thank the Supreme Court, which asked Mr Yeddyurappa to prove his majority within a day. We don’t know what would have happened if more time was given,”’ HDK added in a jibe at the BJP’s sustained attempts to get Congress and JD(S) legislators to cross over.

Reacting to the BJP’s counter allegations of “resort politics”, against the Congress and his party, Mr Kumaraswamy recalled that both the saffron party and the JD(S)’s legislators were also holed up in a resort when their coalition government was formed in 2006.

He also said the government was committed to waiving farm loans, as promised during the elections.

Mr Kumaraswamy accused the BJP-led government at the Centre of using its agencies like the Income-Tax department and the Enforcement Directorate against its political rivals.

He alleged that “fake documents” had been created to claim that he had floated a company in Malaysia and had “huge” properties there.

“An ED fellow asked me about it. I am ready to face any inquiry,” the chief minister said, asserting he would not be cowed down by such bullying tactics.

Ahead of the confidence motion, the JD(S)-Congress coalition had claimed the support of 117 MLAs in the 224-member House with an effective strength of 221. While the Congress has 78 MLAs, the JD(S) has 36, and BSP 1. The alliance also claimed support of the lone KPJP MLA and an independent.

As Mr Kumaraswamy had won from two constituencies, the 104-member BJP needed seven more MLAs to defeat the motion. But like on May 19, when Mr Yeddyurappa failed to muster support of as many lawmakers required to anchor his government’s ship safely, and stepped down, the BJP did not go for a showdown.