India   All India  26 May 2018  PM Sheikh Hasina appeals for help from India to 'protect the young', fight terrorism
India, All India

On Friday, Bangladesh PM had appealed for support from India to put pressure on Myanmar to take back the Rohingya refugees in her country. 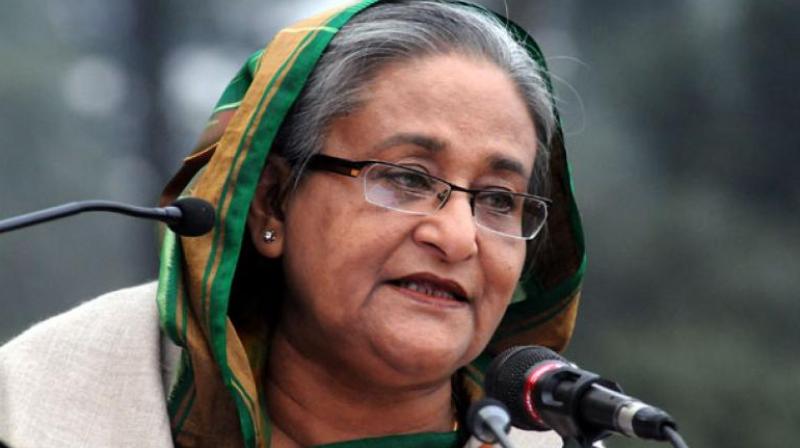 Kolkata: Bangladesh Prime Minister Sheikh Hasina Wajed on Saturday urged India and other neighbouring countries for cooperation to protect the young generation from the clutches of terrorism in South East Asia and for development of the sub-continent.

She underlined that Bangladesh will follow the path of secularism highlighted by famous poet Nazrul Islam in his poetry.

Hasina also vowed to work together with India.

She was delivering her address after she was conferred honorary D.Litt by Kazi Nazrul University during its annual convocation at Asansol in Burdwan West.

Except for West Bengal Education Minister Partha Chatterjee neither CM Mamata Banerjee nor Governor Keshari Nath Tripathi, who were in the invitee list, present for the event.

Noting their absence, Hasina informed that she was aware of Tripathi's ill health. She, however, did not forget to express her gratitude to him as well as the chief minister for setting up the university after Nazrul's name and awarding her the honorary degree from the same academic institution.

The Bangladesh PM said, "We always want the people of this sub-continent to lead a good life. We want our young generation to remain safe from violence, killings, terrorism and drugs in the world. We want them to build their lives in a positive, meaningful and progressive way. This is our prayer. I appeal for cooperation from our neighbouring countries in this context."

Reiterating her call for the return of Rohingya refugees from Bangladesh to Myanmar she said, "While planning development, we do not think only about our country. We think of the subcontinent as a whole. We want to make this subcontinent free of poverty and hunger and turn it into a developed and rich one. We had many problems with our neighbours. We have resolved many of them and have been sorting out others."

The Bangladesh PM added, "We need to focus on how to undertake the welfare of human beings and create a suitable environment for the people to live in this subcontinent. Today, Bangladesh has grown and is a developing nation. It far developed than the way it was left by the Father of our nation: Bangabandhu Sheikh Mujibur Rahaman."

Referring to the passing out students of KNU, Hasina told them, "Nazrul was inspired by secular thoughts. We are building Bangladesh on the line of his thoughts. Secularism is intertwined with our idealism and policy where everyone enjoys equal rights irrespective of religion, caste and creed. I hope you will work in that direction in your life as well."