Speculation is rife that the swearing-in ceremony could take place on May 30 and the even will be attended by several world leaders. 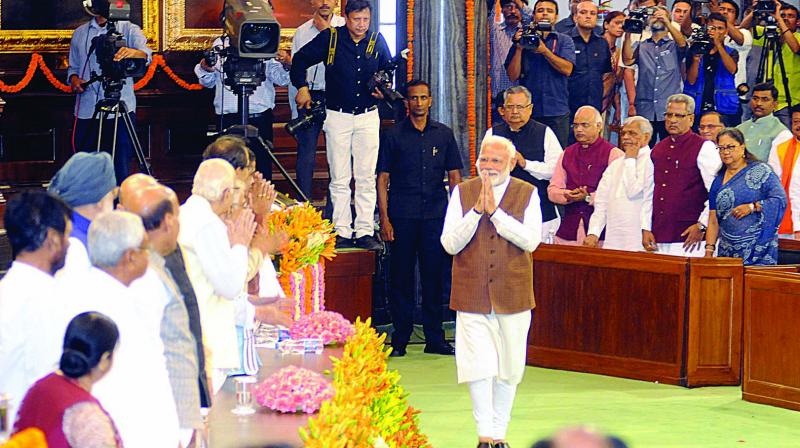 New Delhi: Within hours of being elected the leader of the victorious NDA, BJP leader Narendra Modi was on Saturday appointed Prime Minister-elect by President Ram Nath Kovind, who also invited him to form the new government.

The President has asked Mr Modi to give a list of his Cabinet ministers along with the date of swearing-in. Speculation is rife that the swearing-in ceremony could take place on May 30 and the even will be attended by several world leaders.

Mr Modi met President Kovind in the evening as the leader of the BJP parliamentary party and the NDA, which has a clear majority in the 17th Lok Sabha, to stake a claim to form the new government.

Speaking to media outside the Rashtrapati Bhawan, Mr Modi said, “The President today gave me a letter designating me as the Prime Minister... The country has given a huge mandate and obviously with the mandate comes expectations of the people. Our government will work for the New India.” “In 2022, when India will be celebrating 75 years of Independence, I expect people of India to contribute towards development of the country... We should make use of opportunities available to us. In the coming days, the government will work towards achieving our goals...’Sabka Saath, Sabka Vikas, Sabka Vishwas’ is a mantra that shows the path to development for every region of India,” he said.

While addressing NDA MPs earlier, Mr Modi had upgraded the BJP’s 2014 poll slogan of “Sabka Saath, Sabka Vikas” by adding “Sabka Vishwas” to it, vowing to win the confidence of the poor and the minorities who have allegedly been “deceived” for vote bank politics by other parties in the past decades.

He said the 2019 mandate is a “positive vote” for a “sakaratmak soch (positive thought)” and in fav-our of “pro-incumbency”.

Repeating his commitment to follow the spirit of the Constitution and co-operative federalism, Mr Modi urged people to revive the spirit of nationalism seen during 1942 to 1947 to fight poverty, take the country to a new height and shed its tag of developing nation.

Before the President appointed Mr Modi as PM-elect, a delegation of NDA leaders led by BJP president Amit Shah handed over a letter to Mr Kovind saying that Mr Modi had been elected leader of the BJP parliamentary party and the NDA. The team also presented letters of support from NDA constituent parties.

The BJP had secured 303 seats in the just concluded Lok Sabha elections and emerged as the single largest party. The BJP-led NDA has 353 seats.