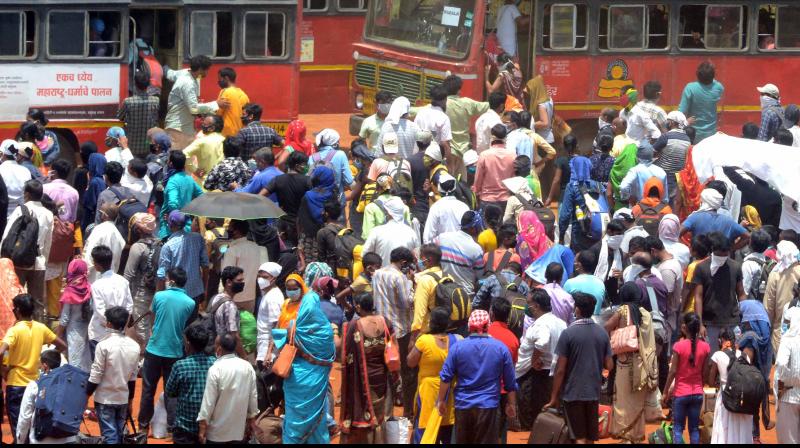 -Thousands of migrants gather at a ground in Wadala, Mumbai, to wait for buses that will ferry them to the railway station as the coronavirus lockdown was imposed in Mumbai on Tuesday. Photo: Rajesh Jadhav

Mumbai: As the political slugfest between Maharashtra government and Railways has refused to die down, thousands of migrants were looking for alternate ways to make their way out of Maharashtra.

Many migrants were seen gathered at a ground in Wadala, waiting for buses to ferry them to the railway station.

Union Railway Minister Piyush Goyal tweeted that the Railways had planned 145 trains for Tuesday but only 13 trains could be run till 3.00 pm due to lack of passengers.

The railways accused the state of not providing details of the passengers, as a result of which many Shramik Special trains had to be cancelled.

On request of Maharashtra Govt, we arranged 145 Shramik Special Trains today. These trains are ready since morning. 50 trains were to leave till 3 pm but only 13 trains have due to lack of passengers.

"Out of these 41 trains, only 39 trains could run as passengers could not be brought by local authorities and these two trains had to be cancelled. After meticulous planning and sustained effort, the Railways mobilised its resources at a very short notice and prepared 145 Shramik trains to depart from Maharashtra on May 26," a statement issued by the Railways said.

"Till 12 noon, 25 trains were planned from Maharashtra to run but no departure could happen due to lack of passengers. Boarding of the first train could only commence at CSMT at 12.30 pm," it said.

Over the last couple of days, the state government and Railways had engaged in a war of words, with the former alleging that the Railways has not provided enough trains to the state to ferry migrants to their respective states.

However, Goyal on Sunday night said that the Railways was ready to provide 125 Shramik Special trains to the state

"Since you have said that you have a list ready that is why I am requesting you to please provide all information like from where the train will run, the list of passengers according to the trains, their medical certificate and where the train is to go, to the General Manager of Central Railway within the next hour, so that we can plan the time of trains," he tweeted.

Commenting on it, Shiv Sena leader Sanjay Raut on Monday tweeted, "Maharashtra government has given you a list of workers who wish to return home. The only request is that the train should reach the station, as announced earlier."

Meanwhile on Tuesday, heavy rush was also seen at Dharavi,a covid-19 hotspot, as hundreds of migrnants made their way to Chatrapati Shivaji Terminus, to leave the city.