India   All India  26 May 2020  Indians soar in the skies again! 5-year-old travels alone, meets mother after 3 months
India, All India

A total of 532 flights were operated on Day 1. In Delhi, 82 flights had to be cancelled on Monday 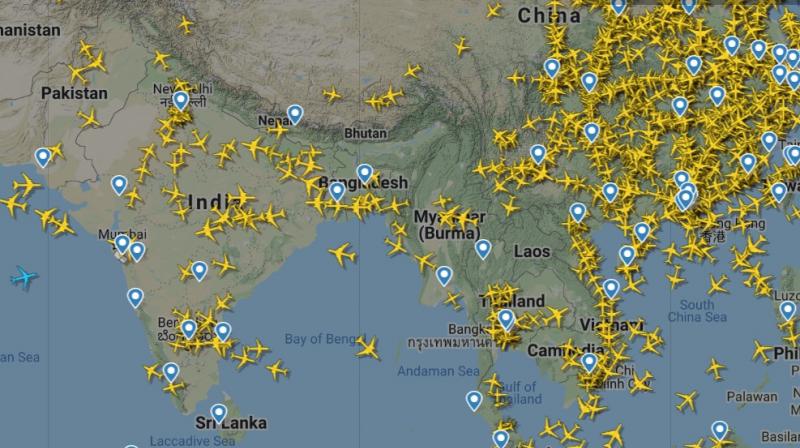 The aviation map of India as seen on the live flight tracker Flight Radar24 at 8 am on Tuesday.

New Delhi: A five-year-old boy who travelled alone from Delhi under the “special category” to reunite with his mother in Bengaluru after nearly three months, and a 28-year-old woman, with two infant twins, who flew from Delhi to her matrimonial home in Ahmedabad were among several stranded passengers in various parts of the country who managed to “escape” to their homes as domestic flights began on Monday after a two-month shutdown.

A total of 532 flights were operated on Day 1. In Delhi, 82 flights had to be cancelled on Monday.

“Indians soar in the skies again! A beautiful live capture from flight radar24 shows how our skies look busy again as domestic civil aviation recommences in India from today. With Andhra Pradesh set to resume operations from tomorrow and West Bengal from 28 May, these numbers are all set to increase further,” said minister of state for civil aviation Hardeep Singh Puri in a series of tweets.

With people covered in masks, face shields and gloves, and airport and airlines staff in PPE kits – airports across India had a completely new look. At New Delhi’s Indira Gandhi International Airport, paramilitary and armed forces personnel, students, tourists and people who had failed to book tickets on the special trains were among the first few to take early morning flights.

Besides, with Id-ul-Fitr falling on Monday, there was an unusual rush too for families to be together. However, due to limited public transport available, many had to shell out large sums to reach the airport.

However, a huge number of last-minute cancellations by the airlines led to chaos, leaving thousands of passengers stranded at airports across India.

Aviation industry sources said altogether 630 of an estimated 1,150 domestic flights for which bookings had opened on May 22 were cancelled after some states like Maharashtra and Tamil Nadu allowed only limited operations or delayed reopening of their airports owing to a spike in coronavirus cases.

The West Bengal government did not relent to a request by the civil aviation ministry to allow flights, and it was decided Sunday evening the state will gradually permit domestic flights from May 28 under strict guidelines.

Andhra Pradesh too did not allow any flights on Monday, but will start them from Tuesday.

Thousands of passengers reached airports since early in the morning on Monday only to be told by the airline staff that several flights had been cancelled, causing hardship to them. Some of them had travelled long distances, across states, to take the flights. Many people took to the social media to vent their anger.

Karnataka, Tamil Nadu, Kerala, Bihar, Punjab, Assam and Andhra Pradesh, among others, announced quarantine measures for passengers arriving at their airports. Some states have decided to put passengers in mandatory institutional quarantine, while others talked of putting them under home quarantine.