India   All India  26 May 2021  Protest flags and marches as farmers observe 'black day' to mark 6 months of stir
India, All India

A brief ruckus was also reported from the Ghazipur protest site 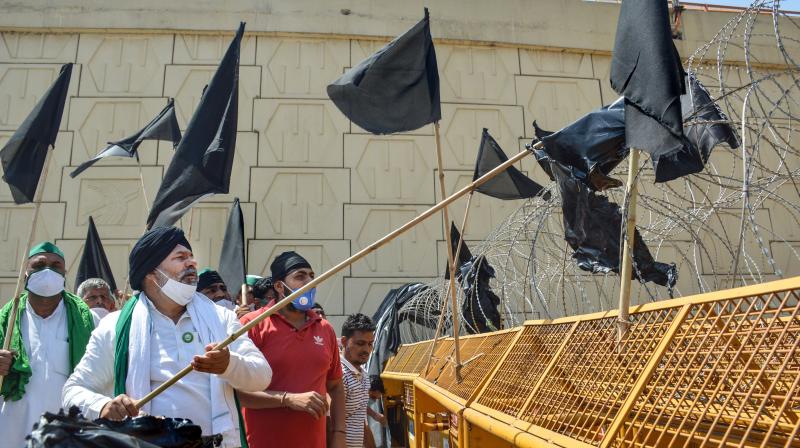 A brief ruckus was also reported from the Ghazipur protest site where farmers burnt an effigy of the central government amid heavy police deployment.

As part of their 'black day' protest, the farmers put up black flags and burnt effigies of government leaders at the three border points -- Singhu, Ghazipur and Tikri -- to register their protest against the three laws as well as the Centre. 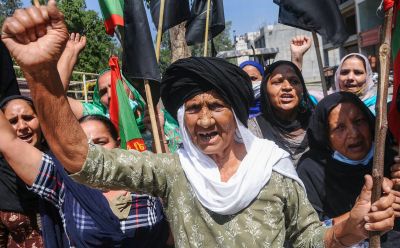 The Delhi Police has urged people not to hold gatherings due to the COVID-19 situation and the ongoing lockdown and said it is keeping a tight vigil to deal with any situation at the protest sites.

Senior farmer leader Avtar Singh Mehma said that black flags have been hoisted not only at the protest sites but also in villages in Haryana, Punjab and Uttar Pradesh, adding that villagers have put up black flags atop their houses as well as on their vehicles.

"Effigies of government leaders were burnt. This day is to reiterate the fact that it has been six months since we have been protesting, but the government, which also completes seven years in office today, is not listening to us," said Mehma.

All those in solidarity of their movement also donned black turbans and dupattas.

At the Singhu border, protestors gathered at the Kajaria Tiles office, held meetings, and took out a march towards the stage.

Farmers burn an effigy during protest against the farm laws marking a Black Day at Ghazipur border in New Delhi. (Photo: (PTI)

"We are urging people to support farmers by putting black flag at their residence and other places," he said.

On Tuesday, the National Human Rights Commission (NHRC) had issued notices to Delhi, UP, Haryana on alleged flouting of COVID norms by the protesting farmers.

The Delhi Police too had urged people not to hold gatherings due to the COVID-19 situation and the ongoing lockdown.

However, Mehma said that the government shouldn't have introduced the three laws during the pandemic in the first place.

"If the government wants us to go back then it should listen to us and repeal the laws, because we are not going anywhere unless our demands are met.

"It is not our hobby to sit in the heat and the cold at the borders. We also want to go back home and be safe," the farmer leader told PTI. 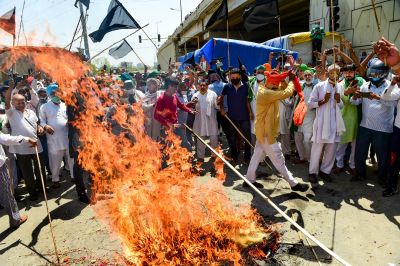 Farmers burn an effigy during protest against the farm laws marking a Black Day at Ghazipur border in New Delhi. (Photo: (PTI)

Police force has been in place at all the borders points, including the protest sites of Singhu, Tikri and Ghazipur, since Tuesday.

At Ghazipur on the Delhi-Uttar Pradesh border, hundreds of farmers, led by Bharatiya Kisan Union (BKU) leader Rakesh Tikait, converged into groups as they burnt an effigy of the Centre in protest.

A ruckus briefly ensued between protestors and the local police, donning anti-riot gears, who had tried to stop them from burning the effigy at the UP Gate below the Delhi-Meerut Expressway.

While many BKU supporters held black flags in their hands, several others had placards that condemned the government and demanded withdrawal of the contentious laws, even as COVID-19 protocols on social distancing and face masks were largely amiss at the site.

Tikait, who has been leading the protest at Ghazipur since November 2020 and had become a prominent face of the protest after the January 26 violence in Delhi, was seen sporting a black-colour turban and a black flag.

The influential BKU spokesperson from western Uttar Pradesh was credited with reviving the protest that had lost sheen after the January 26 violence with his emotional pull that overnight drew support for the farmers on Delhi's outskirts.