India   All India  26 May 2021  Cyclone Yaas pounds Odisha-Bengal coasts, may move to Jharkhand by midnight
India, All India 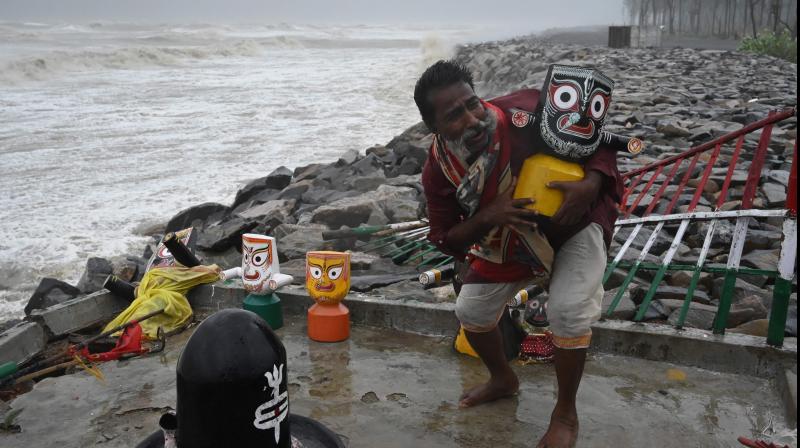 A priest removes an idol of Lord Jagannath from a seafront temple to a safer place while strong winds batter Balasore district in Odisha as Cyclone Yaas barrels towards India's eastern coast in the Bay of Bengal. (Photo: AFP)

Balasore/Digha/Kolkata: Cyclone Yaas pounded the beach towns in north Odisha and neighbouring West Bengal as it hit the coast around 9 am on Wednesday with a wind speed of 130-140 kmph, inundating the low-lying areas amid a storm surge, officials said.

The location of the landfall was north of Dhamra in Odisha's Bhadrak district and 50 km south of Balasore, close to Bahanaga block, on the coast, they said.

The wind speed during landfall was at 130-140 kmph, gusting to 155 kmph, as per Doppler radar data. "The landfall process is likely to be over by 1 pm. The maximum impact will be in Balasore and Bhadrak districts," Odisha's Special Relief Commissioner PK Jena said. The sea will remain rough till Thursday and the accompanying rain will continue, he added.

The wind will slow down by the evening and the cyclone is likely to leave Odisha for Jharkhand by midnight, Jena said.

Odisha has shifted 5.8 lakh people to safer places, while West Bengal has moved 15 lakh people ahead of the cyclone. There was no report of any major damage in Odisha though some incidents of trees getting uprooted have taken place, Jena said.

West Bengal Chief Minister Mamata Banerjee said most parts of the state were affected by the cyclone and the rain it brought along. She urged the people of the state, particularly those in Purba Medinipur, South 24 Parganas, North 24 Parganas, Paschim Medinipur, Howrah, Hooghly, Purulia and Naida, to stay indoors.

High alert in Jharkhand, evacuation on amid cyclone threat

Jharkhand, which was put on high alert, continued evacuating low-lying areas on Wednesday amid the forecast that cyclone Yaas would be hitting the state by midnight after pounding neighbouring Odisha and West Bengal, officials said.

Operations are being executed on war-footing in the vulnerable areas in East and West Singhbhum, besides some other districts, in view of the very severe cyclonic storm Yaas, Disaster Management Secretary Amitabh Kaushal told PTI.

"We are witnessing high-speed wind and have evacuated about 6,000 persons from thatched houses and danger zones to shelter homes in safer locations," East Singhbhum Deputy Commissioner Suraj Kumar said.

People are being shifted from low-lying areas near the two rivers in the district that are below the danger mark at present, he said.

Director-General of Police Neeraj Sinha told PTI, "Satellite phones are being provided to interior Naxal- affected police stations for emergent communications, besides batteries in police wireless systems have been readied in case of communication disruptions due to the storm." "We are ready to deal with the situation and have formed rescue teams," he added.

The IMD also issued a red-coded warning alert to the Odisha and West Bengal coasts.

`Yaas', which was positioned 160 km south-southeast of Paradip in Odisha and 240 km south-southeast of Digha in West Bengal over north-west and adjoining west-central Bay of Bengal on Tuesday evening, is likely to gain a maximum speed of 155 kmph to 165 kmph gusting to 185 kmph during landfall, the Met department said.

"It is very likely to cross north Odisha-West Bengal coasts between Paradip and Sagar Islands close to north of Dhamra and south of Balasore, in the morning hours of Wednesday, the 26th May as a Very Severe Cyclonic Storm," the Cyclone Warning Division of the IMD added.

Flight operations at the Kolkatas NSCBI airport here will be suspended from 8.30 am to 7.45 pm owing to the weather warning on Wednesday, the Airports Authority of India said. Bhubaneshwars Biju Patnaik International airport too will remain shut from 11 pm Tuesday till 5 am on Thursday. The South Eastern Railways too has cancelled several trains,

Andhra Pradesh Chief Minister Y S Jagan Mohan Reddy has asked Collectors of the three north coastal districts to be on a high alert as Yaas crosses over into neighbouring Odisha.

Cyclone Yaas is likely to make landfall by noon on Wednesday with wind speed of about 130 to 155 kmph, informed the India Meteorological Department (IMD), adding that it currently lay centred over northwest Bay of Bengal.

He added, "(As of 6:45 am) The cyclone lay centred over northwest Bay of Bengal near latitude 20.8°N and longitude 87.3°E, about 40 km east of Dhamra (Odisha), 90 km south-southwest of Digha (West Bengal) and 90 km south-southeast of Balasore (Odisha)."
People in Odisha, West Bengal and Jharkhand woke up to strong winds and heavy rain on Wednesday morning and braced for the cyclone.

Chief Minister Naveen Patnaik has urged the people living in the coastal regions of Odisha to cooperate with the local administration and shift to cyclone shelters.

Over 11.5 lakh people were evacuated from vulnerable places in West Bengal ahead of the cyclone, Chief Minister Mamata Banerjee informed on Tuesday, adding that she will stay at the state secretariat 'Nabanna' on May 25 and May 26 to monitor the cyclonic situation and relief work.

The Indian Navy on Wednesday said it has stepped up and made all necessary arrangements for the rescue and relief operations.

"INS Chilka at Khurda has stepped up and made all necessary arrangements, to coordinate the rescue and relief operations in close liaison with State Government agencies with the support of Headquarters Eastern Naval Command Visakhapatnam," informed an official release by Indian Navy

The Indian Navy further said that it has been closely monitoring the very severe Cyclonic Storm Yaas closing in on the Eastern Coast which is likely to cross the between Badrak and Balasore districts on 26 May.

As part of the preparation, a 24*7 cyclone monitoring team has been established and is functional from 24 May, assorted relief material and community kitchen for thousands of people are being made ready for immediate deployment in consultation with state authorities.

The Naval Officer-in-Charge (Odisha) Operations Room has been monitoring ships movement along the coast in coordination with authorities at Gopalpur, Paradip and Damara ports.

"For maintaining constant communication with the Naval and civil authorities, constant liaison is underway from INS Chilka," it added.