India   All India  26 Jun 2019  Children at govt-run school forced to sit under dilapidated building in MP
India, All India

In the dingy rooms and leaky wooden roofs, school children eager to study can be seen sitting on cloth mats in front of a patchy chalkboard. 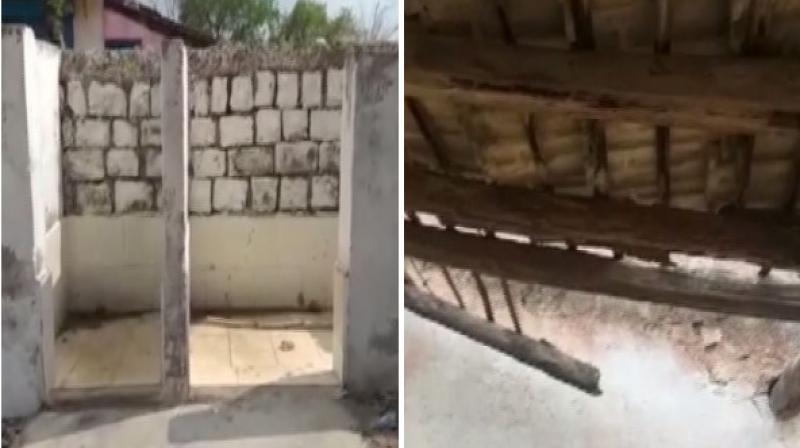 The Government Primary School Bamhori Bika School also does not have basic facilities like drinking water and electricity. (Photo: ANI)

Sagar: Children at a government-run primary school in a village in Sagar district are being forced to sit under dilapidated roofs in a building with crumbling walls.

In the dingy rooms and leaky wooden roofs, school children eager to study can be seen sitting on cloth mats in front of a patchy chalkboard.

The Government Primary School Bamhori Bika School also does not have basic facilities like drinking water and electricity. Even the toilets in the schools are in bad condition and filled with filth.

Ironically, the PHE department has pasted slogans on the walls which read, "Save water".

They claim that several letters were written to the concerned administration but to no avail.

The headmaster of the school, Sulekha told ANI, "We have sent the pictures of the school to the concerned department. We conduct classes in only those classes whose conditions are a little better than others. On our own personal expense, we have installed a fan and extended a pipeline to the school from a nearby well in a village. There are no basic facilities given to us by the government. There is all filth in the toilets due to lack of water, hence, we could not use it. The campus is open due to broken walls. Anti-social elements come here, throw bottles and garbage."

Interestingly, the notice painted on school wall reads, "You are under surveillance of CCTV."

One of the students told ANI, "We do not have drinking water or electricity facility. Due to this, the students have started not coming to school."

DPC of the education department, HP Kurmi said, "The collector has instructed the concerned officials to start the renovation work of the schools. For a week we are organising a 'Joy of Learning' programme to retain children. Money has been sanctioned to the school for its renovation work."