India to tell US: S-400 Russia missile deal on 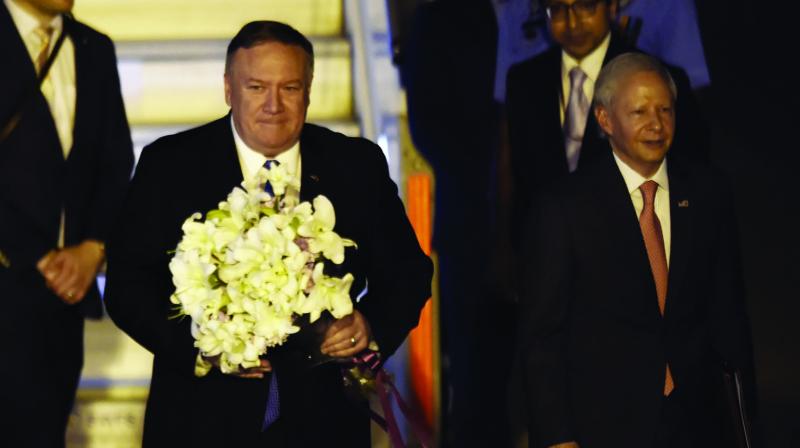 New Delhi: All indications are that India is expected to clearly tell visiting US secretary of state Michael R. Pompeo during Wednesday’s talks is that it will go ahead with the S-400 missile deal with Russia despite US concerns. But in a move that may be music to American ears, Indian oil firms are completely stopping the import of oil from Iran as New Delhi is keen to avoid American sanctions.

India has, however, already informally conveyed both to the US and Iran that they should de-escalate the situation due to rising military tensions in the Persian Gulf. But India is clear it will not mediate between the two nations.

Diplomatic sources confirmed that negotiations for an Industrial Security Agreement between India and the US was in its final stages but the draft agreement will need to be cleared by the Union Cabinet first. This will clear the way for the flow of classified technologies from US industry to Indian industry, including in the defence sector. Cross-border terror sponsored by Pakistan, Indo-US trade ties amd the H1-B visa issue are also expected to be discussed.

Mr Pompeo, who arrived in New Delhi late on Tuesday evening, will call on Prime Minister Narendra Modi on Wednesday morning, after which he will hold talks with external affairs minister

Subrahmanyam Jaishankar, who will host a working lunch for him. Mr Pompeo will also deliver an address on India-US ties on Wednesday evening before he leaves New Delhi on Thursday.

After filing his nomination papers for the Rajya Sabha polls from Gujarat, Mr Jaishankar was quoted as saying: “We will be meeting with a positive attitude... The meeting with Mike Pompeo will be an important one. We will definitely discuss issues related to trade between the two countries. Both countries have their own interests. And it is natural to have some conflicts because of that. We will find a common ground using diplomacy. We will hold discussions with the US with a positive approach.”

Meanwhile, diplomatic sources said on Tuesday: “We have a long-standing (defence) relationship with Russia which we cannot wish away,” making it amply clear India will go ahead with the S-400 deal. New Delhi is also confident it will be the beneficiary of a waiver from the Americans on this score. But India is at the same time strengthening defence ties with the US in more ways than one.

After the inking of two defence agreements with the US earlier — the Logistics Exchange Memorandum of Agreement (Lemoa) in 2016 and the Communications Compatibility and Security Agreement (COMCASA) in 2018, India is now “looking closely” in future at a third possible agreement, which is the Basic Exchange and Cooperation Agreement for Geo-spatial Cooperation (Beca).

“Beca  is another agreement that will allow for sharing of geo-spatial information between the two militaries. This is something we are looking at closely in consultation with all stakeholders. We have had technical-level engagements with the US to understand what this agreement is about, but we have not yet taken a decision on the negotiations. When the stakeholders, particularly the militaries, feel this is of interest to them, of course we will go ahead with the negotiations,” a source said.

India is also set to hold the first-ever tri-service military exercises with the United States later this year.

On rising trade disputes with the US, which is upset over its trade deficit with India, New Delhi is likely to tell Mr Pompeo that India has taken steps to reduce the trade deficit percentage in double digits for all the three years President Donald Trump has been in power. In view of the frequent American allegations that India levies high tariffs on US goods, New Delhi is expected to clearly convey to the Americans that “India is not a high tariff economy”, and that some of the duties even imposed by the US on products like tobacco are far in excess of what India levies. Diplomatic sources on Tuesday described the US allegations of India being a high tariff economy as a “misconception”, which New Delhi will try to clear. Besides this, the issue of data localisation (that India is keen on, which means storage of information on Indian servers) is likely to be discussed with the US, which has concerns on the issue. But sources said that “the policies are still evolving on data localisation”. which is “now at a draft stage”.

Diplomatic sources said Indian oil companies will not continue importing from Iran (in view of the threat of US sanctions) and termed it a “commercial decision”, adding that (Indian) “companies are deciding not to import oil (from Iran) for the time being”.

The diplomatic sources said India’s efforts over the development of Chabahar port in Iran have a US waiver but added that in view of some concerns that Indian firms involved in the port project may have, “the US government needs to make it clear that it (Chabahar port development) is not sanctionable”.