He insisted that the Jharkhand incident was an isolate case and the BJP is completely against such incidents. 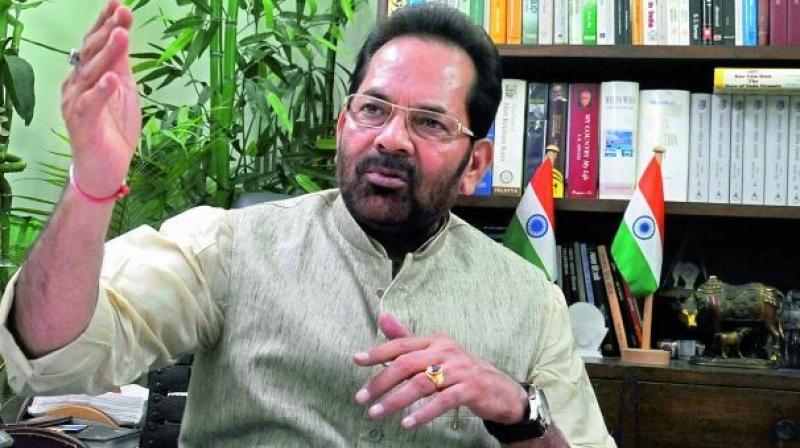 New Delhi: With the Bharatiya Janata Party-led Jharkhand government coming under fire over the lynching of a 24-year-old man over theft and allegedly forced to chant “Jai Shri Ram” and “Jai Hanuman”, Union minister Mukhtar Abbas Naqvi on Tuesday termed the incident as a “heinous crime”, saying ‘Jai Shri Ram’ can be chanted by embracing people and not by throttling them.

Mr Naqvi, who made these remarks on the sidelines of a training programme for Haj deputationists, called for a stern action against those involved in such incidents.

Opposition parties had criticised the BJP over the incident, which was raised in Parliament by Congress leader Ghulam Nabi Azad, who had alleged that Jharkhand had become a “lynching factory”.

“Jai Shri Ram can be chanted by embracing people and not after throttling them. Such incidents cannot be justified. We have committed that we won’t let the destructive agenda dominate the development agenda,” said Mr Naqvi and added that people involved in such incidents have “only one motive to spoil the positive atmosphere created by the government.”

He insisted that the Jharkhand incident was an isolate case and the BJP is completely against such incidents.

A record two lakh Indian pilgrims will perform Haj this year, with 48 per cent of them women, Mr Naqvi said more than 2,340 women will perform Haj without “Mehram” (male companion) this year and arrangements have made to send these women without the lottery system.

The figure was at 1,180 last year. In a first, all applicants from several states, including Uttar Pradesh, Bihar, West Bengal and Andhra Pradesh, will perform Haj as “their wai-ting lists have been cleared due to increase in Haj quota”, the minister said.

“For the first time since Independence, a record number of 2 lakh Indian Muslims will go to Haj this year without any subsidy, on more than 500 flights and from 21 embarkation points across the country,” Mr Naqvi. While 1.40 lakh pilgrims will go through the Haj Commit-tee of India, 60,000 will go through Haj Group Organisers.