India   All India  26 Jun 2019  Navy teams board ships for safe passage in Gulf
India, All India

Navy teams board ships for safe passage in Gulf

Move comes after increase in attacks on oil carriers. 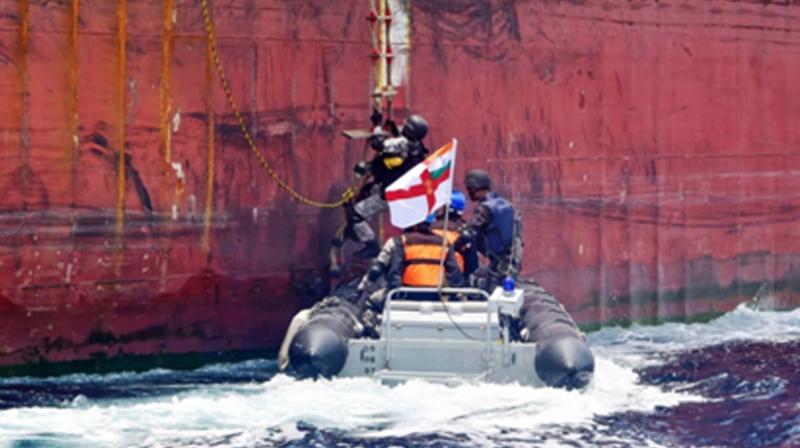 An armed team of the Indian Navy mounts a crude oil carrier.

New Delhi: Armed teams of the Indian Navy are mounting Indian crude oil carriers that pass through the sensitive Strait of Hormuz to ensure their safe passage as part of Operation Sankalp.

The Indian Navy till Tuesday evening escorted five crude oil carriers bringing fuel to the country while passing the Strait of Hormuz through which the Middle East’s crude and gas flow to international markets.

The area has become crucial from the security point of view after attacks on oil tankers in the region and the downing of a US spy drone by Iran.

The strait is strategic as third of the world’s liquefied natural gas and almost 20 per cent of total global oil consumption passes through it. It connects the Persian Gulf to the Indian Ocean.

The US has blamed Iran for suspected attacks on oil tankers. During the “Tanker War” in 1987 and 1988, Iran was said to have used mines to attack oil tankers in the region after which the US Navy was forced to escort the ships.

In addition, aerial surveillance by Navy aircraft is also being undertaken in the area. The Informa-tion Fusion Centre — Indian Ocean Region, which was launched by the Navy in December 2018 in Gurgaon, is also keeping a close watch on the movement of ships in the Gulf region.

DG Shipping had issued two advisories on June 13 and June 16 to all Indian-flagged vessels operating in the Strait of Hormuz and Persian/ Arabian Gulf Region to undertake appropriate protection measures.