After his India visit, Pompeo will fly to Japan to attend the G-20 summit with Donald Trump. 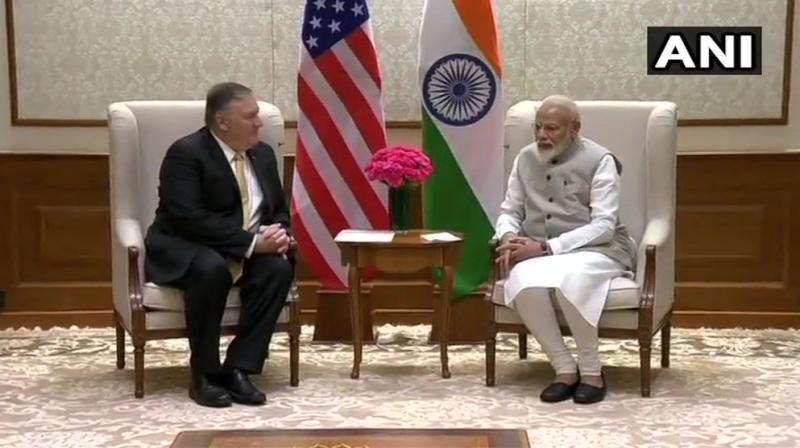 Mike Pompeo's visit marks the third visit to India by a Secretary of State during the Trump administration. (Photo: ANI | Twitter)

The two leaders are expected to discuss key issues like terrorism, H-1B visas, trade, India’s arms deal with Russia and situation arising out of US sanctions on buying oil from Iran.

It is first high-level visit from any country after Prime Minister’s stunning victory in the 2019 general elections. This visit comes ahead of a meeting between US President Donald Trump and PM Modi on the sidelines of the G-20 Summit, which will be held in Japan's Osaka this week.

India’s Foreign Minister S Jaishankar will host a working lunch for Pompeo on Wednesday afternoon. Jaishankar said India will try to find common ground on trade issues during their discussions.

"We will be meeting with a positive attitude...The meeting with Mike Pompeo will be an important one. We will definitely discuss issues related to trade between the two countries," Jaishankar said.

"Both the countries are having their own interests. And it is natural to have some conflicts because of that. We will find a common ground using diplomacy. We will hold discussions with the US with a positive approach," he added.

After his India visit, Pompeo will fly to Japan to attend the G-20 summit with Donald Trump. PM Modi would also be attending the summit of leaders from top 20 economies of the world.

Mike Pompeo's visit marks the third visit to India by a Secretary of State during the Trump administration.