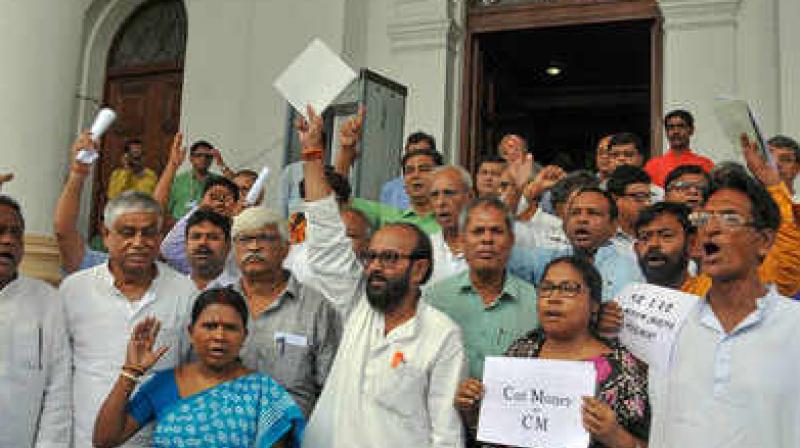 Trilochan Mukhopadhyay, a TMC booth president on the outskirts of district headquarter town Suri, returned the amount to 141 people, from whom he had taken for providing them jobs under the MGNREGA scheme. (Photo: PTI)

Suri: Facing protests from people for taking "cut money", a local leader of the Trinamool Congress in Birbhum district Tuesday returned around Rs 2.25 lakh to over 100 beneficiaries of government schemes from whom he had taken it as commission and apologised to them.

Trilochan Mukhopadhyay, a TMC booth president on the outskirts of district headquarter town Suri, returned the amount to 141 people, from whom he had taken for providing them jobs under the MGNREGA scheme.

"I have apologised to the people and returned the money. I promise I won't do it again," Mukhopadhyay said.

The development came two days after local people staged demonstration outside his house demanding immediate return of "cut money" he has taken in the past few years. A meeting of gram panchayat was called and he was forced to return the money. Each of the 141 people got around Rs 1,600.

Local people claimed that a total of around Rs 2.41 lakh was deposited in the accounts of the beneficiaries as wages for the construction of a drain and Mukhopadhyay collected nearly all of it by force. TMC block president Nurul Islam said it is a good initiative to pay those beneficiaries who had worked only for three-four days. "A section of media is trying to project it wrongly," he said.

BJP state president Dilip Ghosh said this is just a beginning. "In the coming days, senior TMC ministers and leaders will also return cut money taken from the people," he said.

Protests and demonstrations have rocked various parts of the state for the past one week over demanding return of the "cut money" allegedly taken by elected representatives of the ruling TMC from beneficiaries of government schemes. On Tuesday, sit-in demonstrations were held in North 24 Parganas and Birbhum districts over the same demand.

TMC leaders at the municipal and panchayat levels have also been facing public ire in other districts such as Cooch Behar, Jalpaiguri, Burdwan, Malda, Purulia, Nadia, West Midnapore, Bankura and Kolkata.

Leader of opposition in state assembly Abdul Mannan and senior CPI(M) leader Sujan Chakraborty had demanded that the state government immediately form an inquiry commission to look into the issue.

The protests rocked the state following Chief Minister and TMC supremo Mamata Banerjee's recent warning to the party leaders that those involved in taking cut money from government schemes and other corrupt practices would be put behind the bars. At a meeting with TMC councillors, Banerjee had said, "I do not want to keep thieves in my party.

If I take action they will join some other party. Some leaders are claiming 25 per cent commission for providing housing grants to the poor. This should stop immediately. Return the money if any of you have taken it."

In the wake of the protests, the TMC leadership Sunday accused the media of misreporting the interactions between Banerjee and the party leaders and said "99.99 per cent" of party functionaries were hard-working and committed to work for the benefit of the people.