India   All India  26 Jun 2019  ‘Spirits’ do emerge at midnight: one of two brothers residing in Burari house
India, All India

‘Spirits’ do emerge at midnight: one of two brothers residing in Burari house

‘People react strangely to our decision to move here. I have seen many get scared when they realise that we live here,’ Ahmed Ali said. 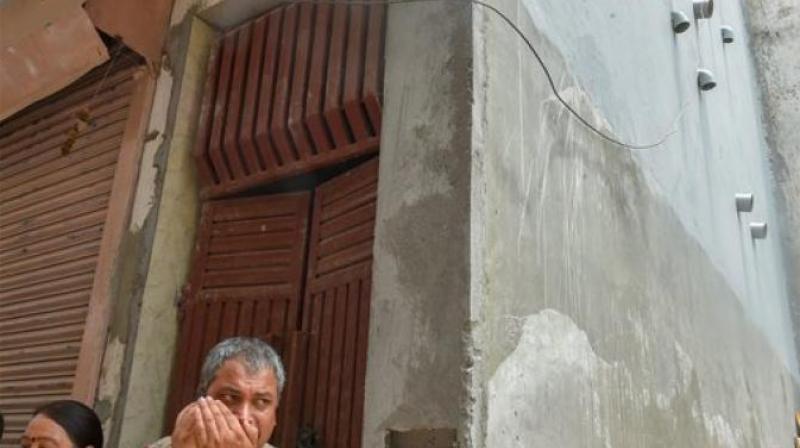 ‘My wife didn’t want me to stay there. I convinced her to let me live there, but she refused to come with me,’ one of the brothers, Ahmed, said. (Photo: PTI)

New Delhi: Two carpenter brothers, Ahmed Ali and Afsar Ali, recently moved into north Delhi’s Burari house, eliciting much shock among the neighbours, many of whom tried to dissuade them from living in that house.

For it was there, almost a year ago on July 1, that 11 members of Chundawat family died in a mass suicide, allegedly after an occult ritual went wrong. The deaths had prompted rumours about ‘supernatural powers’, but the brothers, Ahmed Ali and Afsar Ali, are unfazed.

“If anyone questions our decision, I ask them if they had vacated their houses after deaths in their families. People react strangely to our decision to move here. I have seen many beat a hasty retreat when they realise that we live here,” 30-year-old Ahmed, who has been associated with the Chundawat family for eight years, told Hindustan Times.

The Ali brothers have been living in the house ever since it was handed over to the lone surviving son of the family, Dinesh Chundawat, on October 14. Dinesh and his family had stayed at the house for two nights, before requesting the Ali brothers to move in.

“I wanted no rent from them. Them living there would help dispel rumours that the house is haunted,” Dinesh, who visits the house every few weeks, told Hindustan Times. “Last month, I had stayed there for nearly a week.”

On their first night in the house, the Ali brothers slept on a bed in the same room where the matriarch of the Chundawat family, 80-year-old Narayani Devi, was found hanging from an almirah. He and his brother now occupy a different bedroom in the three-storey building.

“The fact that 11 people we knew for so long had died here just weeks ago spooked us the first few nights. But now, it is like any other house for us,” Ahmed, who continues his carpentry work from a shop on the ground floor of the building, said.

While Ahmed has been able to ignore most superstitions, he does believe that ‘spirits’ do emerge at midnight in the house.

“This is a widespread belief even in my village in Bareilly. Fortunately, my schedule is such that I have my dinner and go to the terrace at midnight. So, when it is midnight, I am on the terrace,” Ahmed said, but his brother Afsar doesn’t share his beliefs.

When the brothers decided to move into the Burari house, the stiffest opposition came from their own family. “My wife didn’t want me to stay there. I convinced her to let me live there, but she refused to come with me,” Ahmed said.

The brothers sometimes invite their co-workers over, but they keep locals away. “Most people only try to scare us,” Ahmed, who has spent multiple nights alone in the house, said. The neighbourhood is abuzz with rumours that the house is for sale. Sandeep, a man who irons clothes in the lane, said he had heard that the house was on sale for Rs 1.5 crore.

“One man approached Dinesh with an offer of Rs1.2 crore, but he turned him down. Many others have approached me with offers of ₹80 lakh,” Sandeep claimed.

“Since the property is so close to the main road, buyers see an opportunity to erect a multi-storey building and give it out on rent. Once the layout of the house is changed, people will forget about the deaths,” Sandeep said.

But Dinesh says he is in no hurry to sell the house. “The house is worth much more than ₹1.5 crore. I won’t sell it for peanuts just because people are trying to scare me,” he said.

He said he is willing to wait another four or five years and, in the meantime, spend considerable time at the house so that people know that all is well with the house.

“If I run away now, people will think there is something wrong with the house,” Dinesh said.

He said he was approached by a doctor who owns an empty plot next to his building.

“There was no formal discussion on the price, but he requested me to contact him if I ever planned to sell,” Dinesh said.

Attempts by HT to reach the doctor failed as he is out of the country.

Local property dealers, however, were not so optimistic. “A few years ago, a man had killed a woman in Burari. I had purchased that property for ₹20 lakh, which was half its market value. This house, too, will go cheap,” Ranjeet Jha, a property dealer in the neighbourhood, said.

Another property dealer, Kishore Singh, said the deaths of two young members of a family in Burari, within a span of three months, are also playing on buyer’s minds.

“Many think that the two deaths are related to the suicides,” Singh said. The relatives of the two dead persons, however, dismissed all such rumours and said the deaths were from natural causes.

“Both my sons died of natural causes. It could be due to the weather or lifestyle-related ailments,” their mother said. The rumours, which locals say have reduced considerably, have not helped Dinesh’s plans to rent out three shops on the ground floor.

“I had put up a board to rent out my shops and, two months ago, I found a woman willing to open a grocery store. She was ready to begin business when her family dissuaded her from doing so,” Dinesh said.

He said his attempts to sell perishable grocery items in his brother’s shop last year, too, had met similar roadblocks.

“Locals warned other shopkeepers from purchasing those goods,” he said.

Dr Ravindra Kumar, who runs a clinic in the neighbourhood, said while he and some other locals have tried to dispel rumours surrounding the house, there was a “deliberate ploy” by some property dealers and prospective buyers to fuel these superstitions “ to keep the property rate low”.

“They hope that Dinesh would feel so harassed that he would sell everything dirt cheap,” Dr Kumar said. The street, meanwhile, continues to attract curious onlookers and the occasional mischief monger.

“Sometimes, at nights, passersby shout the name of one of the dead occupants of the house and run away,” Somnath, an 87-year-old resident, said.