Kumaraswamy shouted at a group of workers who approached him. He was in Raichur for his 'Grama Vastavya' (village stay) programme. 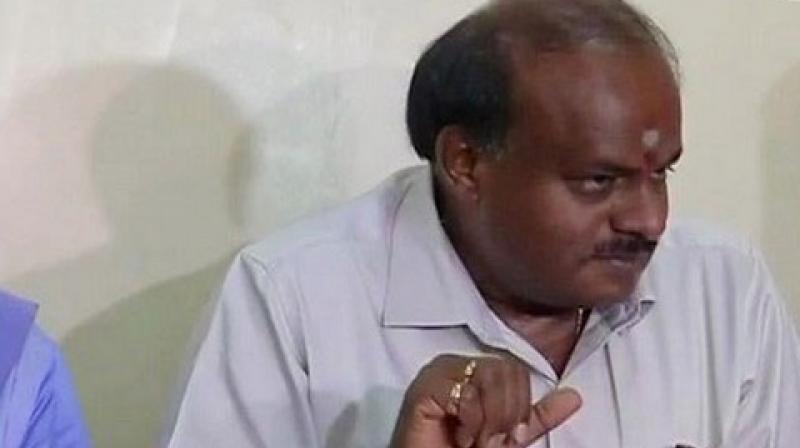 The Chief Minister then left the place. (Photo: File)

Bengaluru: Karnataka Chief Minister H D Kumaraswamy on Wednesday lost his cool when employees of the Yermarus Thermal Power Station (YTPS) in Raichur district blocked his convoy to submit a list of their grievances.

Kumaraswamy shouted at a group of workers who approached him. The Chief Minister was in Raichur for his 'Grama Vastavya' (village stay) programme.

"You voted for Narendra Modi and want me to get your works done! You want me to give you respect. Should I baton-charge you? Leave the place," he told the YTPS employees, leaving onlookers shocked. The Chief Minister then left the place.

#WATCH Raichur: Workers from Yermarus Thermal Power Station protested before the bus of Karnataka CM HD Kumaraswamy over wages and other issues & raised slogans of 'Shame! Shame!', while he was on his way to Karegudda for his 'village stay prog'. The CM got angry on protesters. pic.twitter.com/FK3OI4limx

Later, Kumaraswamy told a television channel that he had sought 15 days time to address the workers' grievances but they blocked the road which made him angry.

He asked if the Prime Minister's convoy was blocked would anyone accept it. This government is tolerant, but it is not incapable and knows how to deal with situations, said the 59-year-old Chief Minister.

He will spend the night at a government higher primary school in Karegudda under Manvi Taluk of the district as part of his 'Grama Vastavya' programme.

This is the Chief Minister's second such stay, the first was in Chandaraki village in Yadgiri district.

Meanwhile, the Karnataka BJP condemned the chief minister's outburst and threatened to stage state-wide agitations if Kumaraswamy did not apologise to the masses. BJP MLC and spokesperson N Ravi Kumar said Kumaraswamy seemed to have forgotten that he is the chief minister of 6.5 crore people of the state and not only of some Janata Dal (Secular) workers and legislators.

Kumar said the Chief Minister's act was against democracy. "This is against democracy. The chief minister should immediately seek an apology from the people. He should call them and hear them. If this continues, the BJP will agitate against him across the state," Kumar told PTI. He reminded the Chief Minister that the purpose of the "Grama Vastavya" programme was to address the grievances of farmers, workers, women, children and people at large.