India   All India  26 Jun 2020  Centre to send teams to Maharashtra, Gujarat and Telangana amid corona surge
India, All India

Centre to send teams to Maharashtra, Gujarat and Telangana amid corona surge

Delhi is now the worst-hit city in the country followed by Mumbai. 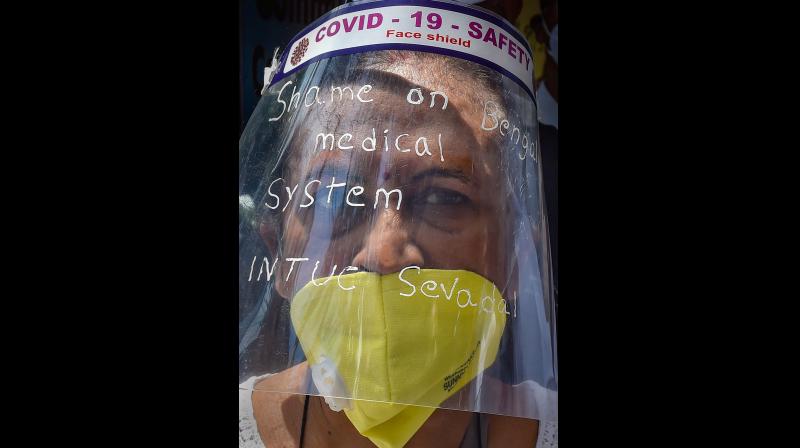 The highest single-day surge of COVID-19 cases crossed the 17,000 mark on Friday, pushing India's tally to 4,90,401, while the death toll climbed to 15,301 with 407 new fatalities, according to the Union Health Ministry data. Updated at 8 am, the data showed the daily COVID-19 cases increased by the highest-ever 17,296 infections.

The number of active cases stands at 1,89,463 while 2,85,636 people have recovered and one patient has migrated, according to the updated figures.   "Thus, around 58.24 per cent patients have recovered so far," an official said.

Of the 407 new deaths reported till Friday morning, 192 were in Maharashtra, 64 in Delhi, 45 in Tamil Nadu, 18 in Gujarat, 15 each in West Bengal and Uttar Pradesh, 12 in Andhra Pradesh, 10 in Haryana, eight in Madhya Pradesh, seven in Punjab, six in Karnataka, five in Telangana, four in Rajasthan and two in Jammu and Kashmir. Arunachal Pradesh, Himachal Pradesh, Jharkhand and Uttarakhand have reported one COVID-19 fatality each in the last 24 hours.

With COVID-19 cases on a sharp rise in some states, union health ministry has decided to send a central team to Gujarat, Maharashtra and Telangana to coordinate with state government and strengthen management of the pandemic.

According to Economist Prof Shamika Ravi, Tamil Nadu seems to be witnessing a second wave of COVID-19 since May end with higher number of deaths. “Tamil Nadu had reported large case load from the beginning of the pandemic in India, managed the first wave remarkably well, with very few deaths” she said while adding that such higher numbers daily in the state could be due to ineffective existing strategy of  contact tracing, testing and isolation. She asserted that there is a need for cluster analysis of testing data at the earliest.

While Maharashtra, Delhi and Tamil Nadu continue to account for 2/3rd of new cases, Prof Ravi said that Telangana is also looking to join the hotspot category with approximately 825 new cases daily. The state, as on Thursday morning, had 10,444 cases with 891 new detections.

Delhi is now the worst-hit city in the country followed by Mumbai. The Union government has lauded Mumbai’s `chase the virus’ strategy under the Rapid Action Plan in major hotspots like Dharavi and Worli that have shown significant improvement.