Lalu Yadav has rubbished the repeated barbs of a breakup, asserting that all is well with Nitish Kumar. 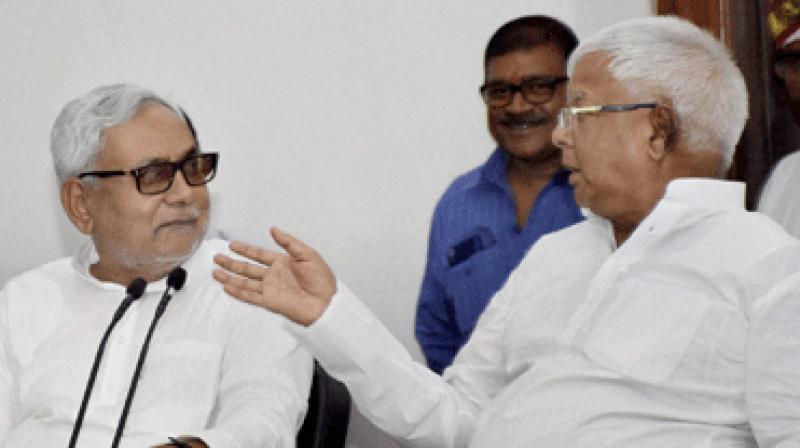 Talking to the media in Patna, Yadav said, "I am aware of the growing bonhomie between Nitish Kumar and the Bharatiya Janata Party (BJP). I know BJP is desperate to ally with Janata Dal (United) (JD(U))."

Yadav further dared Nitish saying the alliance was forged because of him, and the RJD made him Chief Minister.

However, Yadav has rubbished the repeated barbs of a breakup, asserting that all is well with Nitish Kumar.

"Mahagathbandhan is intact and Nitish never asked for resignation from Tejaswi" he said while addressing a press conference in Patna.

Recently, the tension between the 'Grand Alliance' of Congress and RJD had grown as Nitish Kumar was facing increasing pressure to oust Deputy Chief Minister Tejaswi Yadav from the cabinet after charges of corruption were proved against him.

The CBI registered a corruption case against Lalu Yadav, his wife Rabri Devi and son Tejaswi Yadav on allegations of awarding the tender for development, maintenance and operation of hotels in Ranchi and Puri in 2006.

The RJD supremo, however, has refuted the allegations against him and called it a political conspiracy hatched by the BJP.

Meanwhile, the BJP is mounting pressure on Nitish Kumar to oust Tejashwi Yadav from the party.

Senior BJP leader Sushil Kumar Modi said, "Nitish Kumar has no defence so he must immediately suspend Tejaswi Yadav. JD (U) is asking for a response since there has been enough delay in the matter. There is a strong case against Lalu Yadav's son. He has to clarify on the anonymous assets."

Modi also warned that they will not let the House function if an adequate response did not come from the Rashtriya Janata Dal (RJD) supremo.