The BJP usually leads in taking credit (for its various policies), and it should do the same for the bandh and violence, Shiv Sena said. 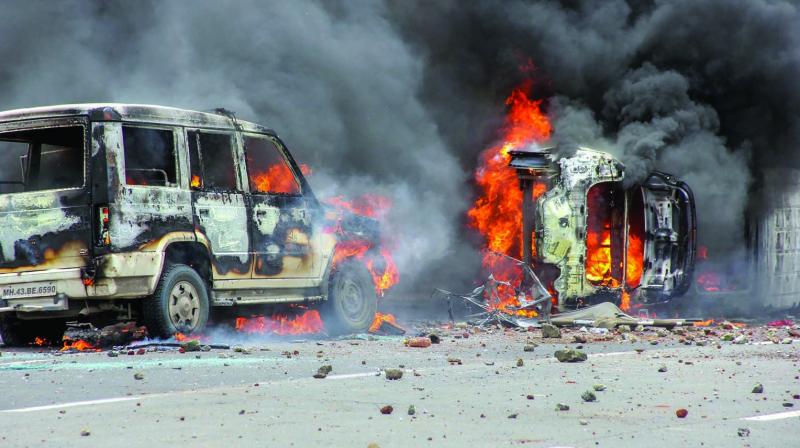 It had become difficult for police to control the crowd taking part in the Maratha morchas because apart from being emotional, this (the community's demands) has also become a prestige issue and the government seemed helpless in the last 24 hours, the Shiv Sena noted. (Photo: PTI | File)

Mumbai: Taking a dim view of violence during the Maratha quota stir in Maharashtra, the Shiv Sena said on Thursday the state paid the price for the government's nature to "suppress" issues, and criticised Chief Minister Devendra Fadnavis for "missing from the scene".

The BJP usually leads in taking credit (for its various policies), and it should do the same for the bandh and violence, the Shiv Sena said.

Had the Chief Minister agreed to talk to the Maratha community when it all started with some people protesting in Parli (Beed district), the subsequent events would not have taken place, it said.

"However, the state had to pay the price for the government's nature, wherein it tends to suppress issues," the Sena alleged in an editorial in party mouthpiece 'Saamana'.

It had become difficult for police to control the crowd taking part in the Maratha morchas because apart from being emotional, this (the community's demands) has also become a prestige issue and the government seemed helpless in the last 24 hours, the Shiv Sena noted.

It said that Chief Minister Fadnavis, who usually tries to solve every problem himself, was missing from the scene and nobody knew his whereabouts or what he was up to, while the state was in chaos as the Maratha agitation turned violent.

Similar was the condition of Sudhakarrao Naik's government after the 1992 riots, said the Sena, which is an ally of the BJP at the Centre and in Maharashtra.

"Where was the chief minister when protesters turned violent, burnt vehicles. Why did the government run away? Maharashtra should know this," the Marathi daily said.

It said the government's decision to fill over 70,000 posts was also responsible for the violence.

"The violence was only natural when the community members feared losing all of these jobs in the absence of reservation," it said.

The policies framed by Fadnavis and his colleagues with regard to the community would be keenly watched, the Sena said.

Notably, Fadnavis had said in the state legislature last week that his government would allot 16 per cent of the 72,000 posts it is going to fill to the Maratha candidates in the form of backlog, if the Bombay High Court allows quota for the community.

"Some people are saying that the posts won't be available to the Marathas in case the high court announces reservation for them if we went ahead with the mega recruitment. I would like to assure that we have more posts available than this," Fadnavis had told the assembly.

"Even if we fill the 72,000 posts, 16 per cent posts would be filled as a backlog as and when reservation is granted to the Marathas. Therefore, there would be no injustice meted out to the community," he had said.

The Sena said, "The BJP is at the forefront of taking credit. Similarly, they should take credit for yesterday's bandh and violence. They may take full credit for providing reservation to the Marathas but there should be an end to this violence."

The previous Congress-NCP government could have resolved this issue keeping the legal aspects in mind. However, it chose the ordinance route to grant 16 per cent reservation to Marathas which was ultimately challenged in court, it noted.