Locals led by social worker Basanat Chejara arrived with tractor and rescued family and driver from there and carried them to safe location. 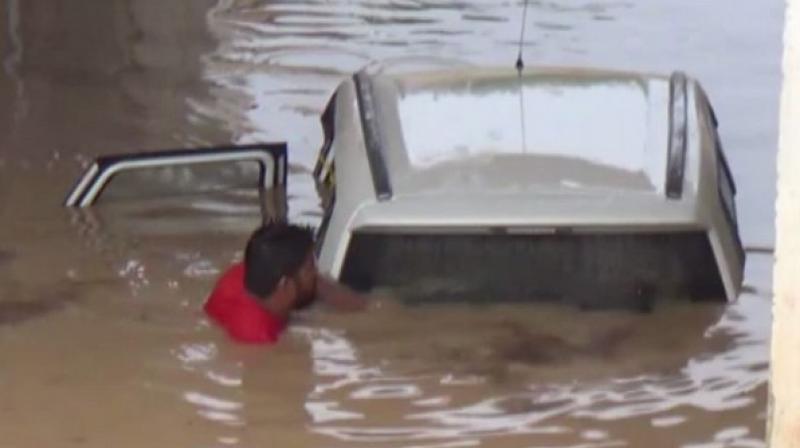 The waterlogging was caused by the rains which had taken place in the past few days in the area. (Photo: ANI)

Jhunjhunu: Locals here rescued five people from a car which had gotten stuck at the waterlogged Untwalia- Bissau railway underpass.

The wife and three children of a Nohar based Public Health Engineering Department (PHED) official were travelling, along with their driver, to Alwar when they got stuck midway at the underpass on Thursday.

"We didn't pay attention to the level of water at the underpass. That is why we got stuck there, only the roof of the car was above the water. We were in a bad situation but thankfully the locals here rescued us. We are thankful to them for saving the family," Piyush, the son, who was travelling in the car said thanking the locals.

The locals led by social worker Basanat Chejara arrived at the stop with a tractor and rescued the family and driver from the spot and carried them to a safe location.

"We got information that a car has gotten stuck in the water at the underpass. We rescued five people including two women and a child from the car and put them in a safe area. It is fortunate that no loss of life took place," Chejara said.

The waterlogging was caused by the rains which had taken place in the past few days in the area.