No respite from floods in Assam, Bihar

The death toll due to floods and landslides has reached 123 in Assam, and 10 people have died due to the deluge in Bihar 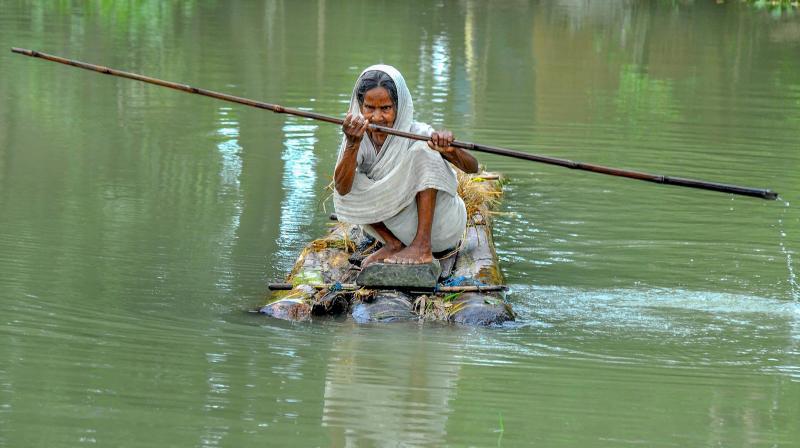 An elderly woman rows a makeshift raft to cross a flood-affected area of Mayong village in Morigaon district of Assam. PTI photo

The flood situation remained grim in Assam and Bihar on Saturday with one more death reported from the northeastern state and nearly 36 lakh people affected in total.

The death toll due to floods and landslides has reached 123 in Assam, and 10 people have died due to the deluge in Bihar.

In Assam, nearly 26.38 lakh people were affected by the deluge in 27 districts, a government report said.

While 97 people have died in flood-related incidents, 26 were killed in landslides, it said.

The report said the number of people affected by the deluge has decreased by over 1.6 lakh since Friday, while that of the district has increased by one.

Goalpara continued to be the most affected district with 4.7 lakh people hit by the deluge, followed by Barpeta (4.24 lakh) and Morigaon (3.75 lakh), it said.

The report said the floods have so far claimed the lives of 127 animals of different species, while 157 others were rescued in Kaziranga National Park.

In Bihar, relief packets were air-dropped in the flood-affected districts to the north where over a million people have been hit by the deluge. No fresh casualties were reported on Saturday.

The packets contain two-and-a-half kg of rice, one kg gram, half kg jaggery, match box and a packet of candles.

Besides, the state government will also soon start disbursing Rs 6,000 as gratuitous relief to flood-affected families after identifying them.

As per a state bulletin, 10.61 lakh people have been affected in 10 districts.

Thirteen teams of the NDRF and eight of the SDRF are involved in the rescue operations, officials said.

Train services between Sugauli-Narkatiaganj have been suspended due to flood waters touching the girder bridge between Sugauli-Majhowalia section in East Champaran district, an official said.

In Sikkim, an Indian Air Force helicopter airlifted essential commodities for the people of two remote villages in North Sikkim, which are cut off from other parts of the state due to landslides, an official release said.

The MI-17 helicopter carried out three sorties and dropped essential supplies comprising 100 bags of rice weighing 50 quintals each, 550 litres of cooking oil, 1.5 quintals of salt, 100 packets of candles and matches and medicines among others for the people of Sakyong and Pentong villages of North Sikkim, it said.

The villages are cut-off from the nearest town Dzongu since July 10 last as multiple landslides had washed off roads and bridges connecting these villages due to incessant rainfall.

Up north, heavy to very heavy rains lashed parts of Rajasthan, and light to moderate rain and thundershowers occurred at a few places over eastern Uttar Pradesh, while a 'yellow' weather warning for thunderstorm was issued in Himachal Pradesh.

In Delhi, the maximum temperature was recorded at 35.5 degrees Celsius, one notch above the normal for this time of the year, and rains gave the city a miss during the day.

The city's humidity level oscillated between 68 per cent and 95 per cent.

The city is likely to see moderate to heavy rains on Monday, Tuesday and Wednesday, the weather office said earlier.

In Himachal Pradesh, the highest temperature was recorded in Una at 34 degrees Celsius, while the lowest was registered in tribal district Lahaul-Spiti's administrative centre Keylong at 13.2 degrees Celsius.

The weather office in Shimla has predicted rainfall in the state till July 31.

Heavy to very heavy rains lashed parts of Rajasthan, with Marwar junction in Pali district recording the maximum rainfall at 15 cm in the last 24 hours till Saturday morning.

The department has predicted heavy rains at some places in the state during the next 24 hours.

Light to moderate rain and thundershowers occurred at a few places in eastern Uttar Pradesh and at isolated places over the western part of the state, the Lucknow weather office said.

Etawah was the hottest place in the state with a maximum temperature of 38.4 degrees Celsius.