So far, 2,29,074 persons have been evacuated from the affected areas, the government said in a statement 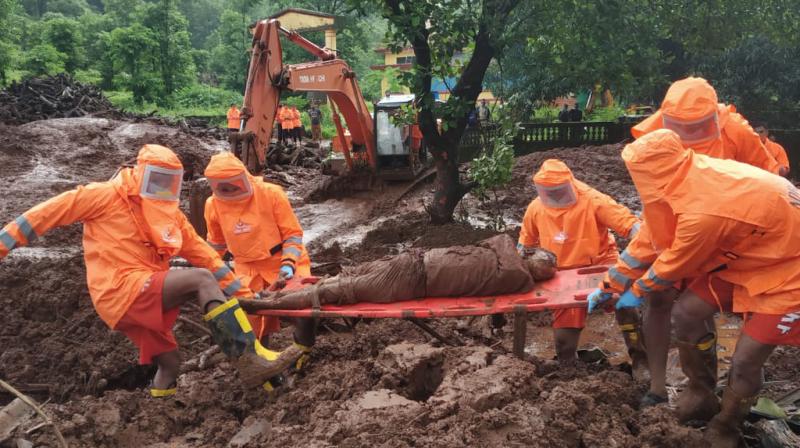 Mumbai: The death toll in rain-related incidents in Maharashtra rose to 164 on Monday after the recovery of 11 more bodies in Raigad and two each in Wardha and Akola, while 100 people were still missing, the state government said.

So far, 2,29,074 persons have been evacuated from the affected areas, the government said in a statement.

It said till now, 71 people have died in Raigad district, 41 in Satara, 21 in Ratnagiri, 12 in Thane, seven in Kolhapur, four in Mumbai and two each in Sindhudurg, Pune, Wardha and Akola.

Besides, 56 people have been injured in rain-related incidents, while 100 people are still missing, it said.

In Raigad, 53 people were reported missing, in Satara-27, Ratnagiri-14, Thane-four, and Sindhudurg and Kolhapur-one each.

The release further said 34 people were so far injured in Raigad, seven each in Mumbai and Ratnagiri, six in Thane and two in Sindhudurg.

Deputy Chief Minister Ajit Pawar toured various rain-hit villages in Sangli district on Monday and used a rescue boat to reach out to flood victims in some areas.

Pawar also interacted with the flood-affected people and assured them of rehabilitation and all help from the state government.

On Sunday, Chief Minister Uddhav Thackeray visited Chiplun, the site of severe flooding in Ratnagiri district in the Konkan region, and interacted with residents, businessmen and shopkeepers. He promised them all help from the state government to restore normalcy in the area.

Thackeray had said they will require "central assistance for long-term mitigation measures" and a comprehensive data of the extent of damages will be prepared.

Heavy rains last week caused floods and landslides in some areas of Maharashtra, including the deadliest landslide at Taliye village in the Raigad district.