Many now have immunity against COVID-19 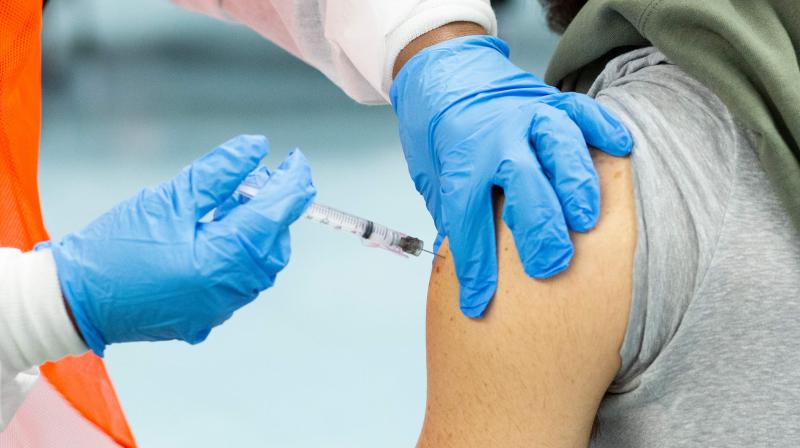 In this file photo a man receives a dose of the Moderna coronavirus disease (COVID-19) vaccine. (Photo:AFP)

NEW DELHI: While a large number of people have immunity by now against coronavirus due to previous infections or vaccination, a guarded approach is needed in terms of implementing restrictive measures so as to avoid a second-wave-like crisis, experts said.

Dr Yudhyavir Singh, managing the Covid19 ICU at AIIMS here, admitted that it is important to lift a few restrictions to resume economic activities when cases are low.

“However, one should not lower his guard. Adopt a guarded approach in terms of following Covid19 -appropriate behaviour and implementing restrictive measures,” he said.

However, Dr Pooja Khosla, consultant (department of medicine), Sir Ganga Ram Hospital, said the second wave has taught us that cases can increase suddenly. “There are warning signs from abroad. In India too, a small increase in cases has been recorded. Infections can increase exponentially anytime. I think one should not assume anything and make all efforts to prevent a second-wave-like crisis, which was a nightmare.”

“Opening everything is not appropriate. Everyone has been saying the third wave is a couple of days away,” Dr Khosla added.

Pragya Sharma, professor, department of community medicine at the Maulana Azad Medical College, said a third wave is certain but the number of people it will infect will depend on the implementation of preventive measures and the pace of vaccination.

“Even if there are breakthrough infections among the vaccinated people, the severity will be less and hospitals will not be overwhelmed,” she said.

Sharma thinks the implementation of preventive and restrictive measures is an issue. “People either don't wear masks or don't wear them properly. Most of them use cloth masks, which do not serve any purpose. There is hardly any vigil being maintained in crowded areas,” she said.

After a devastating second wave of the coronavirus, people had started taking vaccination seriously. There would be queues at vaccination centres, but things have changed again. There is laxity on the part of the people,” Dr Sharma said.

“At the inoculation centre at MAMC, only around 50 people are getting vaccinated a day, while we can vaccinate around 200 people every day. Vaccines are available, but the people are not coming forward,” she said.

Dr Jugal Kishore, head of the community medicine department at Safdarjung Hospital, said around 80 per cent of the people have immunity against the virus either due to previous infection or due to vaccination.

“The Delta variant of coronavirus was responsible for upto 60 per cent of the cases during the second wave. We haven't observed any major difference between 'Delta' and 'Delta Plus' variants. So, a sudden spike in cases is not expected, until a new, more infectious variant emerges,” he said.

Still, there are a percentage of people who have not been infected or did not develop enough antibodies despite getting vaccinated. This set of people, which is almost 30 per cent of the population in Delhi, is likely to get infected.

“Two scenarios are possible; first, the virus continues to infect people slowly until heard immunity is attained; and second, a new, more infectious variant leads to an increase in cases till everyone has developed immunity. It seems the third wave won't be as severe as the second,” he said.

With the lifting of restrictions, people from rural areas have started coming to Delhi, or those who have remained isolated so far are stepping out. “If such people go to crowded places, then there is a possibility of a spike in cases,” he said.

There is also a possibility that a new variant bypasses the immunity achieved through vaccination and previous infection. If that happens, it will be a huge problem, Dr Kishore added.

Niti Aayog member Dr VK Paul has also told the Delhi Government to remain watchful as the next three months are important and unlocking activities can lead to an increase in  cases.

“A third wave of Covid19 is unlikely to be as severe as the second wave,” Dr Samiran Panda of the Indian Council of Medical Research had told the Delhi Disaster Management Authority during a meeting on July 9. “A substantial third wave would be plausible if any new, more infectious variant of the coronavirus emerges and escapes prior immunity in the absence of adequate lockdown measures,” he had said.

Dr Panda suggested that vaccination efforts be ramped up to strongly mitigate the impact of a possible third wave.

Delhi battled a brutal second wave of the pandemic that claimed a large number of lives, with the shortage of oxygen at hospitals across the city adding to the woes. On April 20, Delhi had reported 28,395 cases, the highest in the city since the beginning of the pandemic. On April 22 the case positivity rate was 36.