The terror strike took place at the crack of dawn when the militants entered the police complex in the worst-hit Pulwama district. 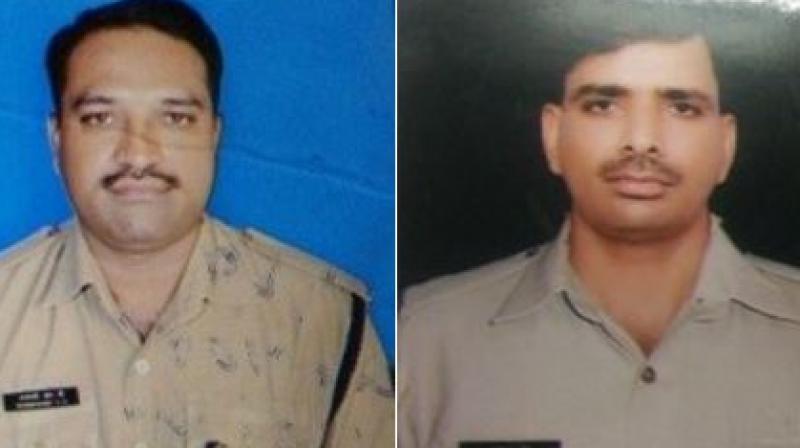 Srinagar: Eight security personnel were killed and half a dozen others wounded on Saturday after a group of heavily armed militants stormed a police base in Jammu and Kashmir’s southern Pulwama.

In the ensuing gun battle, two militants were also killed, the officials said. They added that the gun fight was underway as reports last came in.

“The bodies of two terrorists were seen lying at the encounter site but one or two more are engaged in a gun battle with the security forces,” said a police official.

A man who introduced himself as the JeM spokesman Hassan Shah telephoned Srinagar-based news agency CNS to say “our valiant mujahedin stormed the CRPF camp located within the District Police Lines at Pulwama and inflicted casualties upon the armed forces.”

He added, “The Indian armed forces have suffered huge damage while the mujahedin are giving them a tough time”.

The authorities acknowledged it was the deadliest militant attack, so far, this year.

J&K’s Director General of Police, Shesh Paul Vaid said it was a sad day for the security forces combating a nearly three-decade old militancy in the State.

"It was a sad day for us. However, the boys fought bravely and we are only more determined to wipe out militancy from the entire State," he said.

Chief Minister, Mehbooba Mufti, said she strongly condemns the killing of the jawans of J&K Police and the CRPF in the predawn attack at Pulwama’s District Police Lines (DPL).

“Violence of last three decades or more has taken a heavy toll on the people of the State in terms of death and destruction, tearing apart of the social fabric, inflicting massive economic, academic and other losses besides the irreparable loss of human lives,” she said in a statement here.

Former Chief Minister and working president of opposition National Conference (NC), Omar Abdullah, tweeted, “Very sad. This encounter has had a very high number of security force casualties. Heartfelt condolences to the families of the deceased.”

Two more CRPF jawans who are yet to be identified were killed later when they were defusing one of the improvised explosive devices planted by the militants inside the DPL.

Two Special Police Officers (SPOs) identified as Rafiq Ahmed Hajam and Muhammad Yusuf Hajam-both residents of Pulwama - who had gone missing after the militants stormed the DPL at 3.40 am and police nursing orderly Amarjit Singh, a resident of J&K’s central district of Budgam, are also among the dead.

Two buildings caught fire during the fighting and one of these was completed destroyed, the sources said.

The official sources said that the DPL on the outskirts of Pulwama town and about 33-km  south of here is spread over a 2-km square area and is secured by an 11-feet-high wall.

Apart from the various units of the J&K police including the counterinsurgency Special Operations Group (SOG) and family quarters of the police personnel, the camps of the CRPF’s 182 and 183 Battalions are also located inside the DPL.

The Army’s 55 Rashtriya Rifles has also set up a camp near the DPL and the entire area falls in ‘high security zone’ of Pulwama. How the militants managed to breach the security and then make their way into the DPL has come as a shocking-surprise to the authorities. A court of inquiry into the incident is likely to be ordered by the authorities.

The J&K police denied any hostage situation occurred inside the DPL. “All the families have been evacuated. There is no hostage situation in the ongoing encounter at the DPL (Pulwama),” a brief statement issued to the media by it here said.

However, Union Home Secretary, Rajiv Mehrishi, said that two SPOs got stuck inside a building and it was not known if they were dead or alive.

“It is difficult to say whether they are safe or not, but their life is certainly in danger,” he told reporters in New Delhi after attending an emergency meeting convened by Home Minister, Rajnath Singh, to discuss the situation arising out of the militant attack.

Mr. Mehrishi said, “The terrorists have burnt one building, while the number of terrorists involved has not been accurate enough but they are definitely two to four”.

Inspector General of Police (Kashmir range) Munir Ahmad Khan said that the identity of the slain militants was being ascertained but added that one who fell first appeared to be a foreign national- most probably a Pakistani.

Hundreds of J&K and CRPF officers and jawans were stationed at the DLP when the militants forced stormed it.

“After forcing their entry into the premises, the terrorists resorted to indiscriminate firing and also tossed hand grenades,” said a senior police official.

The injured security personnel were first taken to the district hospital where three of them were declared dead on arrival. The others were later admitted to Srinagar’s 92-Base Army Hospital.

The reinforcements from the J&K police’s counterinsurgency Special Operations Group (SOG), the CRPF and the Army rushed to the area and launched a massive operation to flush out militants, the police sources said.

Mr. Khan said that all security personnel and other staff and their families trapped inside a building at the DPL were evacuated. Reports said that the militants took up positions in two buildings and were engaged in a gun battle by the security forces.

Reports from Pulwama also said that loud explosions were heard amid exchange of gun fire. Two quarters within the premises were soon in flames. But Mr. Khan said that one of the buildings within the DPL caught fire due to an LPG cylinder blast after heavy exchange of fire.

While the encounter was underway, surging crowds clashed with security forces in the Pulwama town. The witnesses said that groups of youth chanting pro-freedom slogans took to the streets at several places in Pulwama and started hurling rocks at the security personnel who retaliated by bursting teargas canisters.

Meanwhile, the gunmen attacked an Army Caspar vehicle with a rifle grenade at Hygam on the outskirts of north-western town of Sopore on Friday night, the official said. No casualties were reported, however.