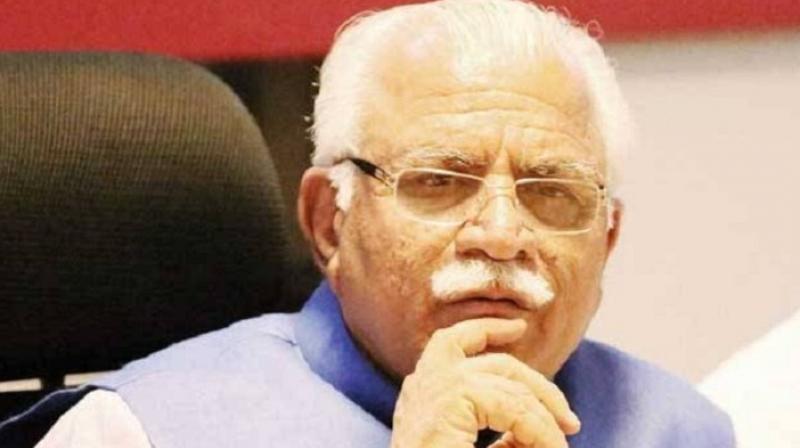 The High Court also took note of Khattar's statement on Friday in which he blamed anti-social elements for the violence. (Photo: PTI/File)

Chandigarh: The Punjab and Haryana High Court on Saturday castigated the Manohar Lal Khattar government over the deadly violence that erupted in the state, saying it had
"surrendered" before the followers of Dera Sacha Sauda head Gurmeet Ram Rahim Singh for "political considerations".

At a special hearing, a full Bench of the court minced no words in slamming the chief minister for "protecting" the Dera followers and extending political patronage to them.

The court observed that the BJP government seemed to have "surrendered before the followers of Dera Sacha Sauda for political considerations."

"This was a political surrender to allure vote bank," it observed, a day after Dera followers went on a rampage across Haryana following the conviction of the self-styled
godman in a rape case by a court in Panchkula.

36 people have died so far and over 269 are injured, with curfew being imposed at several places.

The Bench, comprising acting Chief Justice S Singh Saron, Justice Avneesh Jhingan and Justice Surya Kant, was hearing a Public Interest Litigation (PIL) filed by a Panchkula resident who had raised law and order concerns and stated that over 1.5 lakh people had reportedly entered the district earlier despite prohibitory orders.

The High Court also took note of Khattar's statement on Friday in which he blamed anti-social elements for the violence, which also spilled over into neighbouring Punjab, Rajasthan and Delhi.

"After the CBI court verdict, you immediately came to know that anti-social elements got mixed up with the followers, but how is it that you failed to take note when large number of Dera followers arrived in Panchkula," the Bench pointed out.

The large-scale build up of Dera followers in Panchkula and the lack of action to evict them was a "political surrender", it said.

The court also restrained the Dera from transferring, selling or leasing out its properties, while directing it to submit a list of its movable and immovable assets.

It asked the Punjab and Haryana governments to submit their plans on avoiding such situations in the future and directed the Deputy Commissioners across Punjab and Haryana to invite claims for compensation for any losses suffered due to the violence.

The state government was asked to inform the Bench about any plans to sanitise the Dera Sacha Sauda headquarters. The court also came down heavily on the BJP government for "misleading" it by furnishing wrong information on the number of vehicles in the Dera head's convoy when he was travelling to the court in Panchkula from Sirsa.

The Dera chief, who earlier had 'Z' category security, travelled in a huge convoy of vehicles which had his security guards and several followers.

Punjab Advocate General Atul Nanda submitted in the court that there were 51 incidents in the state with 39 FIRs being registered. Nineteen people have been arrested including one Gurdev Singh, a state-level office bearer of Dera Sacha Sauda, he said.

Haryana Advocate General Baldev Raj Mahajan submitted that there have been 32 casualties in the state, 28 of which were from Panchkula. He said that out of the 28 bodies, one has been identified.

As many as 524 people have been arrested in Panchkula, he said. Twenty-four vehicles, five pistols with 79 rounds, and 2 rifles with 52 rounds were recovered, he submitted before the court.

The court asked the government to verify a report carried in a regional daily that alleged that five Dera leaders had instigated and mobilised followers.

The Bench directed the registration of an FIR against the instigators if the reporter stood by his report.

The court had on Friday asked the Dera to submit the list of assets and properties which can be attached "in case it is found that they and their followers are responsible for damaging properties".

The next hearing will be held on August 29.